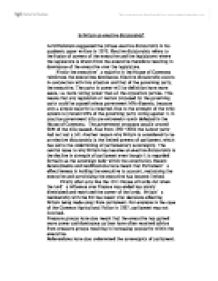 Is Britain an elective dictatorship?

Firstly this is seen by the relationship between the cabinet and the Prime Minister. Tony Blair's period as Prime Minister since 1997 has stimulated renewed debate about the location of power within the executive and the relationship between the Prime Minister and the cabinet. Blair's presidential style is reflected in his cabinet management. The meetings are short, and are held less frequently. The Prime Minister dominates executive decision, making key decisions without consulting the cabinet. For example an " Elective Dictatorship" meant Tony Blair was still able to proceed with the Iraq war even though most of his cabinet disagreed with him, and two of his cabinet ministers, Robin Cook and Claire Short resigned. However critics can also say that a Prime Ministerial style government has been around before Blair. Margaret Thatcher also had a Prime Ministerial style government for example she went against most of her cabinet in key decisions for example her decision for poll tax. Therefore Britain can be said to have had a "Elective Dictatorship" before the Blair government. ...read more.

When a vote of no confidence is passed in Parliament, every minister and government official drawn from Parliament automatically resign in their role as the executive, the entire executive is dismissed. Even though the powers of the House of Lords is restricted they are still able to act as a check on the executive. This is because they are still involved in the process of legislation. The house of lords has the power to amend and reject bills and also the House of Lords are able to delay bills. The power of the executive has grown and the checks are in place to prevent abuse of this power. It is important for the legislature to keep a watch on the executive so the control is maintained and it does not slip into a dictatorship. These checks mean that Britain is not theoretically an " Elective Dictatorship", as rules still exist which means the executive can not have a dictatorial role. Britain currently is not an " Elective Dictatorship", as the Parliament still has some effectiveness in scrutinising the executive, however as Britain is falling more into a Prime-ministerial style government there is possibility that Britain can become an "Elective Dictatorship." ...read more.