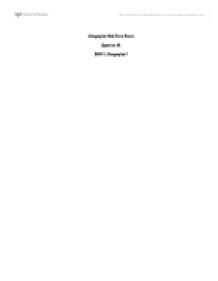 Is Europe evolving to &quot;supranationalism,&quot; that is a United States of Europe, or are nationalistic and ethnic irredentist designs creating devolution or splitting of existing states?

Geography Mid-Term Exam Question #2 SS111, Geography I Is Europe evolving to "supranationalism," that is a United States of Europe, or are nationalistic and ethnic irredentist designs creating devolution or splitting of existing states? Discuss the ongoing European unification efforts, as well as those states experiencing ethnic autonomy movements. Make an estimate as to which trend will prevail. No country seems to immune from devolutionary forces, even in modern Europe. Britain has its Scotland, France its Corsica, Spain its Basques and Catalans, the former Yugoslavia, and there are several others throughout the realm. However, one must look to the creation of the European Union (EU) and German reunification as the "silver lining" of supranationalism, a force of modern Europe that, at this point in history, seemingly will not be stopped. It would seem there are many arguments for supranationalism, with the strongest being that countries participating in multinational association are less likely to take unilateral actions. ...read more.

Another country riding the wave of supranationalism is the other leading Western European nation, France. A pillar of Europe, both economically and militarily, France remains a powerful force in the European Union. Although there is a moderate plan of decentralization underway, Paris remains in the forefront of French and continental affairs. Today's high-tech French industries, most notably transportation and telecommunications, have benefited tremendously from greater participation in the European Union. The Benelux nations (Belgium/Netherlands/Luxembourg) and Nordic Europe (Sweden/Norway/Finland/Denmark /Iceland/Estonia) are also strong supporters of the European Union and a more global economic base, and each of them provide significant contributions, particularly Norway's oil reserves, to the European economy. But perhaps the greatest challenge to European supranationalism will be the poorer Mediterranean and Eastern European nations. With problems such as per capita population, in comparison with the rest of the continent, and high unemployment rates, the Mediterranean states, have much potential, but currently offer little economic support to the supranationalistic cause. ...read more.

Lastly, many European Union members see Portugal, Greece and Cyprus as outright leaches upon the intraregional economy. One rule of EU membership is that the richer members assist the poorer ones, and this has been the rule of thumb in regard to their economic contributions. The greatest regional challenge to supranationalism and a true intraregional economy will be Eastern Europe. This region of Europe has such a history of splintering and fracturing, most notably the Balkans, that it has been coined a shatter belt. Although the region contains much potential for future economic development, until strong centralized governments can be forged out of its many devolutionary elements, Eastern Europe will remain a sore spot for the supranationalistic cause for many decades to come. It can be concluded that the forces of supranationalism will continue to grow in most of the European realm, while devolution continues to plague specific regions, particularly those of less economic value. Ultimately, one must believe that supranationalism will win out, but not without a long and winding path. ...read more.