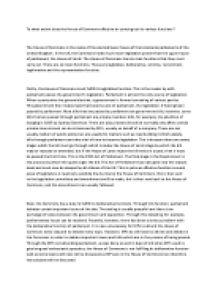 Is the House of Commons effective at carrying out its various functions?

﻿To what extent does the House of Commons effective at carrying out its various functions? The House of Commons is the name of the elected lower house of the bicameral parliaments of the United Kingdom. In the UK, the Commons holds much more legislative power than the upper house of parliament, the House of Lords. The House of Commons has six main functions that they must carry out. There are six main functions. These are legislative, deliberative, scrutiny, recruitment, legitimation and the representation function. Firstly, the House of Commons must fulfill its legislative function. This is the means by with parliament passes the government?s legislation. Parliament is almost the only source of legislation. When a party wins the general election, a government is formed consisting of various parties. This government then makes laws that become acts of parliament, the legislation, if having been passed by parliament. Most bills that are passed by parliament are government bills, however, some bills that are passed through parliament are private members bills, for example, the abolition of hanging in 1967 by Sydney Silverman. There are also private bills which normally only affect certain private interests and can be introduced by MPs, usually on behalf of a company. ...read more.

They can therefore influence them to vote for a certain bill for example. In that respect the House of Commons does not effectively carry out its scrutiny function as bills are not getting voted for, for the right reasons, it is because MPs are being forced to vote for things to protect things they do not want people to know. Prime Ministers questions are also a very significant aspect of scrutiny. Because of the fusion of legislative and executive powers under our parliamentary system of government, the head of our executive is a member of the legislature. This means he or she gets direct questioning by MPs which occurs once a week for 30 minutes. Prime ministers question often draws lots of media attention but does not lead to much scrutiny so here the function is not carried out well because it just mainly emphasizes the conflict between the two parties. The select committees were established to shadow and scrutinize each major government department. There are now 18 such departmental select committees, which have 11 MPs, drawn from the parties in rough proportion to the number of seats they hold. ...read more.

If parliament is fulfilling its other functions, presumably it will command greater respect and hence will be an important source of legitimation. The final function of the commons is that of representation. MPs have a duty to represent their constituency in the House of Commons. Clearly, no single candidate will have 100% of the vote, other people will have voted for the opposition. It is therefore necessary for the successful candidate to represent everyone in the constituency regardless of whether they voted for them or not, in essence, the MP represents the interests of their constituency. There has been much controversy over what the representative function of parliament actually means. There is one view that every kind of person in society should be represented by one of their ?Own?. Therefore there would be a gay representative for gays etc. However, this clearly separates society. In all, the representative function is performed well. The MPs do listen to their constituents, no matter who they voted for. In some cases though, MPs do take a different stance. To conclude the above six functions are key to the success of parliament. Without one, the system would not function correctly. Every function is not performed perfectly and some are clearly far less effectively executed than others, for example, the function of scrutiny where MPs expenses were not moderated or controlled well enough. ...read more.