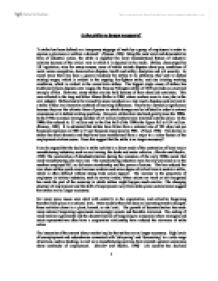 Is the strike no longer necessary?

Is the strike no longer necessary? 'A strike has been defined as a temporary stoppage of work by a group of employees in order to express a grievance or enforce a demand.' (Hyman, 1984) Being the most overt and demonstrative form of industrial action, the strike is arguably the most misunderstood feature of industrial relations because of the critical way in which it is depicted in the media. Strikes, discouraged by UK legislation, arise for many reasons, some of which include disputes about pay, conditions of work, union recognition, demarcation disputes, health and safety, discipline and job security. In recent years there has been a general tendency for strikes to be defensive; they seek to defend existing wages, which is evident in the ongoing fire-fighters strike, and also existing working conditions, which is evident in the recent train strikes. The biggest single cause of strikes has traditionally been disputes over wages; the famous Pilkington strike of 1970 provides an excellent example of this. However, many strikes are also held because of fears about job certainties. This was reflected in the long and bitter Miners Strike in 1984, where workers were to lose jobs in the coal industry. Strikes tend to be viewed by union members as a last resort; disputes need not lead to a strike if there are alternative methods of resolving differences. They have a symbolic significance because they are the ultimate form of power in which damage can be inflicted in order to extract concessions or to defend existing positions. However, strikes have declined greatly since the 1980s. ...read more.

With the added pressure during the economic downturn of the early 1990s, where it was difficult for individuals to push for higher wages, and then the low inflation environment of the UK since then (low levels of inflation reduce employee expectations of higher pay increases whilst high levels of inflation tend to encourage strikes as concern with maintaining real income grow), unions have found it more productive to try and work with employers rather than fight them. This suggests that strikes are no longer necessary because there is an increased understanding between employers, subordinates and unions today. Although recent developments suggest that strikes are no longer necessary, we only have to look at current employment relation issues in the British economy to see that conflicts of interests still exist and that strikes are still occurring. Modern examples include strike action being taken by public sector workers including fire-fighters, teachers, university academics, and tube and rail workers. It is apparent that these individuals feel that they need to strike in order to demonstrate their determination on an issue or because negotiations have developed in such a way that a strike is seen as unavoidable. Current economic pressures in Britain propose suitable reasons as to why strike activity is still necessary. The 'London Weighting' dispute argues that the cost of living in London is too expensive, in relation to elsewhere in the UK, thus public sector workers want to be compensated for the higher cost of living. One aspect of the Association of University Teachers (AUT) case is that since 1992, the cost of living in London has risen substantially. ...read more.

Although strikes have intangible economic costs, they are occasionally necessary as we have discovered in the arguments presented above. In my judgement, strikes are only justified to an extent. Individuals should only resort to strike action if alternative methods of action have proved to be useless or if their complaints are not being taken seriously. However, I believe that many strikes today are unnecessary, particularly those that are economically motivated, because strikers cannot expect their full demands to be achieved, without some other sacrifice having to be made. For example, increases in salaries may mean a certain amount of job shedding is required and this can have potentially dire consequences for the rest of the economy. The fire-fighters case is a good illustration; whilst the fire-fighters argument is well presented, a 40% increase is too much to expect in a short time span. (This does not however mean that they are not entitled to an increase in pay) Nevertheless, if they are given the increase they want, other professions will soon be demanding the same, which could potentially cripple the economy. Therefore in the majority of cases it is not financially feasible to meet strikers' demands, as is evident in the fire-fighters case, thus suggesting that strikes are unnecessary. All things considered, conflicts of interests will always exist. It is unlikely that employers and employees will ever agree on all matters because both sets of individuals possess different interests. For example, employers' interests may include profit maximisation whilst employees' interests may include increased pay. Until organisations are able to balance these contrasting objectives, conflicting interests will continue to exist and individuals will continue to take severe forms of industrial action, through strikes if necessary, in order to convey their true feelings of contempt. ...read more.