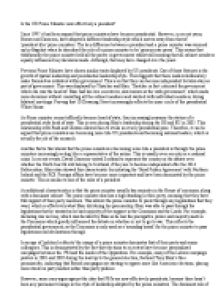 Is the UK Prime Minister now effectively a president?

﻿Is the UK Prime Minister now effectively a president? Since 1997 it had been argued that prime ministers have become presidential. However, in recent years, Brown and Cameron, have adopted a different leadership style which moves away from that of 'president-like' prime ministers. The key difference between a president and a prime minister was summed up by Bagehot when he described the role of a prime minister to be 'primus inter pares'. This means that traditionally the prime minister held all the power in government whilst still ensuring that all cabinet members equally influenced key decisions made. Although, that may have changed over the years. Previous Prime Minister have shown similar traits displayed by US presidents. One of those features is the growth of spatial leadership and presidential leadership style. This suggests that these leaders deliberately make themselves outsiders within government. This is so that they can become independent but also stay as part of government. This was displayed by Thatcher and Blair. Thatcher in fact criticised the government which she was the head of. Blair had his core executives, also known as the 'sofa government', which made more decisions without consulting all the cabinet members and worked with individual members, during bilateral meetings. ...read more.

For example, declaring war on Iraq, which was decided by Blair as he has the prerogative power and majority seats in the Commons which greatly influenced the debate on whether or not to go to war. This reflects the presidential government, as the Commons is only used as a 'sounding board' for the prime minister to pass legislations and declarations through. In an age of 'political celebrity' the image of a prime minister dominates that of their party and senior colleagues. This is demonstrated by the fact that elections to an extent have become personalised campaigns between the PM and the leader of the Opposition. For example, many of the Labour campaign posters in 2001 and 2005 during the lead up to the general election, featured Tony Blair?s face prominently, indicating that British campaigns are starting to appear more like American elections, placing more stress on party leaders rather than party policies. However, some may argue against the idea that PM's are now effectively presidents, because there hasn?t been any permanent change in the style of leadership adopted by the prime ministers. ...read more.

A final point is that prime ministers can only be as powerful as their ministerial colleagues allow them to be. Although the cabinet may not appear to be important it actually holds a significant amount of authority as it can turn against the prime minister, stopping them from making the decisions that they want. This was evident during Thatchers term when she was oust out of government by her own cabinet members because she made majority of decisions without consulting them, as a president would do. Prime ministers are stopped by their cabinet members from becoming presidential. In conclusion, although some previous prime ministers have appeared to become 'presidents', it is important to remember that the legal system of British politics has not changed. This means that the prime minister will never be able to become the head of state and head of government, as a president is. The extent to which prime ministers can act as presidents depends on variable factors such as economic situation, strength of executives dominance and political profile in the media. The future for the British political system is unknown, but it appears to steer away from a presidential government. ...read more.