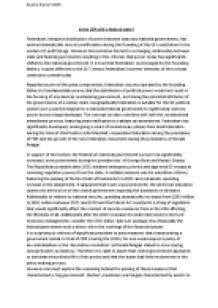 Is the USA still a federal state?

﻿Neema Daniel 13AXS Is the USA still a federal state? Federalism, being the distribution of power between state and national governments, has evolved dramatically since its proliferation during the founding of the US constitution to the modern US political age. However this evolution has led to a changing relationship between state and federal governments resulting in the criticism that power today has significantly shifted to the national government. It is true that federalism, as envisaged by the Founding fathers, is quite different to the 21st Century federalism; however elements of the concept continue to prevail today. Regarded as one of the great compromises, federalism was incorporated by the founding fathers to fundamentally ensure that the distribution of political power would not result in the forming of a tyrannical, overbearing government, such being the potential attributes of the governments of a unitary state. Geographically federalism is suitable for the US political system as it would be illogical for a national (federal) government to significantly exercise power across a large landscape. The concept too also coincides well with the constitutional amendment process, featuring state ratification to validate an amendment. Federalism has significantly developed, undergoing a series of evolutionary phases from dual federalism during the time of Chief Justice John Marshall, cooperative federalism during the presidency of FDR and the growth of the new federalism movement during the presidency of Ronald Reagan. ...read more.

Firstly the law is a universal health care reform affecting all of America, secondly it requires that all are health care insured (and if unable to afford then payments for insurance can be subsidised) and that states introduce health care marketplaces for the prospective insured. A minority discontented group in the Republican Party, the Tea party, reflect the criticism against the measure, and such criticism culminated during the government shutdown in October 2013. Therefore Obama?s presidency can be identified as being dominant in the political system. However one must acknowledge the Republican Majority in the House of Representatives being a check on the president?s power and in terms of federalism that state governments have been able to shape aspects of Obama?s environmental policy. Consider California, regarded as the pioneer state in the development of environmental policy to reduce carbon emissions. States power is arguably insufficiently protected against what one may consider as an increasingly overbearing centralised policy. This may be the fault of the constitution by the 10th amendment does not specify the rights granted to the states. This contrasts with the necessary and proper clause of Article I enabling congress? sovereignty to preside over the states for the purpose of governance. Since the McCulloch and Maryland case, over the issue of a national bank, the interpretation paved way for later rulings upholding federal power over state power. ...read more.

Additionally the Morrison verses USA case in 2000, declared provisions of the Violence against Women Act Unconstitutional, because they exceeded the congressional power of the commerce clause and section 5 of the 14th amendment. More recently the Supreme Court has interpreted Congress? commerce powers in a more limited sense due to tenure of strict constructionist justices?. Thus it appears that the Supreme Court has taken heed of state sovereignty, and not always is the division of power resting in the federal governments favour. In conclusion the USA is still a federalist state, despite the dramatic changes that have occurred since the early days of the Constitution because when considering the exercise of federal government power, mainly this in response to dramatic events that require intervention to restore stability, like the collapse of the stock exchange in 2008 and 9/11. Federal government power, in comparison to state government power is exercised far less. State governments share the sovereignty of their national counterparts significantly when there is political and economic stability. Mainly during instability state dependency increases, thus the national government becomes bolder, hence the saying ?the federal governments did not create the states, but state governments created the federal government?. And so the divisions of power are not solely in the hands of the federal authority because periods of stability are more common than those of crises. ...read more.