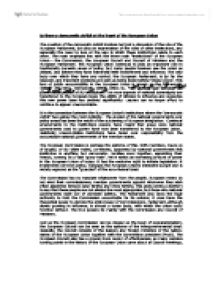 Just as the European Commission can be viewed as the body of supranationalism, the European Council can be seen as the epitome of the intergovernmental ideal. Basically, the Council consists of the leaders and foreign ministers of the nation-states of the European Union together with the Commission president (Prodi). The European Council also has a proven track record of effectiveness, as many decisive turning points in the history of the European Union came about at Council meetings, such as that at Maastricht in 1991. An important point to make in regard to the European Council is that national governments, since the Single European Act of 1986, no longer have the right to veto proposed initiatives, rather decisions are taken using a system known as Qualified Majority Voting (QMV). The Council of Ministers mirrors the European Council, dealing not with national issues but with sectional affairs such as agriculture or transport. It plays a valuable part in co-ordinating the efforts of national governments on a continent wide basis. Critics state that in many ways, its powers make the representive Council more like the legislature body than the elected Parliament. Parliament has no authority to endorse appointments, and indeed has no influence over selecting candidates. ...read more.

The idea of a Parliament of Europe, to represent the hopes and aspirations of Europe's people is a noble ideal. However, it is a concept, which the people are not ready for. The view of Euro co-operation in the Parliament is an attractive one, but does it really make a difference, which way votes go when the Parliament makes little or no difference to policy making? Ultimately, the people of the European Union do not want a powerful European Parliament, most wish for questions of national interest, to continue to be resolved at a intergovernmental level rather than a supra-national level. That said Parliament does have a role in addressing concerns common to all European Union citizens, issues such as the environment and human rights, which at present are dealt with largely by the unaccountable Commision. From this it is clear that the democratic deficit will never be resolved until the European Union is willing to strike a balance, and change the framework of the European Union's institutions. It has to be remembered that this was only ever an economic body, which has evolved into a political arena and the levels of accountablity haven't evolved similarly, allowing for a Union devoid of accountability and lacking a mandate to implement legislation. ...read more.