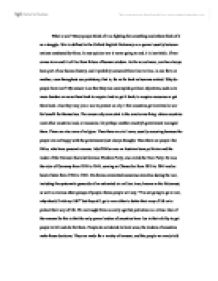 What is war? Many people think of it as fighting for something and others think of it as a struggle. War is defined in the Oxford English Dictionary as a quarrel usually between nations conducted by force. In my opinion war is never going to end, it is inevitable. If war comes to an end it will be from failure of human wisdom. As far as we know, war has always been part of our human history, and it probably occurred from time to time, in one form or another, even throughout our prehistory, that is, for as far back as humans existed. Why do people have war? My answer is so that they can accomplish political objectives, such as to move borders or move them back to acquire land or get it back, to acquire resources or get them back. ...read more.

Some people will say, "I'm not going to go to war, why should I risk my life?" but they still go to war either to better their way of life or to protect their way of life. We are taught from an early age that patriotism is a virtue. One of the reasons for this is that the only power leaders of countries have lies in their ability to get people to kill and die for them. People do not decide to have wars; the leaders of countries make those decisions. They are made for a variety of reasons, and the people are rarely told the real reason. People have war because it is the nature of trade, to gain pride and power, the environment and because it is the nature of mankind. There have been many wars that have occurred around the world, two of the biggest wars that have happened in the world are clearly World War I and World War II. ...read more.

Furthermore, soldiers, as well as civilians tend to run the risk of being injured, maimed, killed, and sometimes brainwashed. So many people have lost their loved ones in a war, it was and still is a huge problem in the world, but we really have do not have a choice. In conclusion war will always be a problem in this world, whether we like it or not, we need war to settle and get things straight. But as far as I'm concerned fighting is in the blood of humans, it is a state of mankind, and therefore we will never be able to stop it. For that reason, war is inevitable. We are at a new beginning, and the view ahead, though cloudy, is rich with promise. War will continue for a while, certainly during the rest of our lives, but it will no longer be functional in an evolutionary sense, and it will wither away as everyone comes to realize and accept the essential unity of humankind. :) ...read more.

2 Stars - Although articulate in places, this is a superficial piece of writing which deals in generalised comments and narrative rather than analysing or evaluating the causes or effects of warfare. Examples of warfare are abundant in human history, but these examples are used only cosmetically in this piece rather than for support or enlightenment.