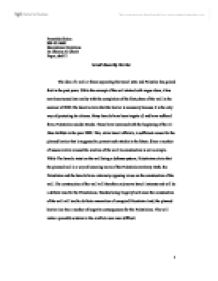 Franziska Salem 900-02-0600 International Relations Dr. Sherine El Ghatit Paper, draft 2 Israel's Security Barrier The idea of a wall or fence separating the Israeli state and Palestine has gained fruit in the past years. While the concept of the wall started with vague ideas, it has now been turned into reality with the completion of the first phase of the wall in the summer of 2003.The Israelis claim that the barrier is necessary because it is the only way of protecting its citizens. Many Israelis have been targets of, and have suffered from, Palestinian suicide attacks. These have increased with the beginning of the Al-Aksa Intifada in the year 2000. This, claim Israeli officials, is sufficient reason for the planned barrier that is supposed to prevent such attacks in the future. Since a number of issues revolve around the erection of the wall its construction is not as simple. While The Israelis insist on the wall being a defense system, Palestinians claim that the planned wall is a way of annexing more of the Palestinian territory. Both, the Palestinian and the Israelis have extremely opposing views on the construction of the wall. The construction of the wall will therefore only serve Israeli interests and will be a definite loss for the Palestinians. Besides being illegally built since the construction of the wall will lead to de facto annexation of occupied Palestinian land, the planned barrier also has a number of negative consequences for the Palestinians. This will make a peaceful solution to the conflict even more difficult. ...read more.

Another reason which also reflects a sense of protection is the concept of "demographic threat" that many Israelis are concerned with. Dayan points out that by 2020, 15 million people, of which the Jews will only constitute 45 percent, will be living between the Jordan River and the Mediterranean Sea. He concludes that this might result in the loss of the Jewish identity as well as the democratic nature of its state; and that a border must therefore be established in order for Israel to maintain its identity.10 Furthermore, asserts Steinberg, a barrier would enable Israel to establish a "clear political boundary within which the Israeli government would have full sovereign control."11 The preservation of a Jewish state is highly important for most Jews because it reflects the essence of the Zionist movement. Also a motive that is considered is the fact that the erection of a fence might lead to the "disengagement" of both sides, which might increase the possibility for the creation of a Palestinian state.12 Israelis do not believe that the construction of the fence might hinder the establishment of a sovereign Palestinian state; but on the contrary, the wall is seen as an important instrument by many to end the violence, and around 70 percent of the Israeli public is in favor of the construction of the barrier. In considering the effect the wall might have on the Palestinians, Minister Matan Vilnai states that the wall might "make life more difficult for the Palestinians, but that terror is the root of the problem."13 Impact of the Barrier on the Palestinian Economy and Society: While the Israeli economy is strongly rooted with access to foreign markets, the Palestinian economy is highly dependent and vulnerable. ...read more.

He also believes that the fence will give the Palestinians a feeling of imprisonment and that it will destroy their hope of ever getting back their homeland. This, in relation with their economic problems will radicalize many Palestinians and will make peace even more impossible.25 Daniel Seidemann, a lawyer and Jerusalem civic activist also fears that the construction of the fence will threaten the situation in Jerusalem and lead to the radicalization of Palestinian residents. He states that East Jerusalem has been generally quiet during the Intifada and that the fence will bring "people there to the side with terror."26 The erection of the wall will clearly undermine the peace process and is therefore very dangerous. That the fence will "disengage" both sides and consequently lead to a peaceful solution is highly unlikely and the construction of the barrier should therefore be considered again. The erection of a barrier by the Israelis is in essence a good idea; and as already constructed sites have shown security will definitely be achieved. However, the problem is the route that this fence is planned to take. With the enclosure of the occupied Palestinian territory the fence is going to undermine the livelihood of most Palestinians. Besides being a humanitarian question, the fence will also contribute to the frustration and radicalization of many Palestinians and will therefore hinder the peace process. Unfortunately, little has been done by the International community to prevent the construction of the barrier in occupied territories; even though its erection is illegal. Phase A of the fence has already been completed and what is to follow is only a matter of time. ...read more.