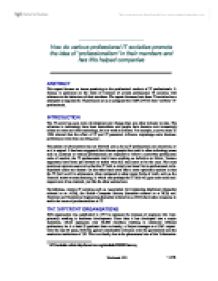 __________________________________ How do various professional IT societies promote the idea of 'professionalism' in their members and has this helped companies ___________________________ ABSTRACT This report focuses on issues pertaining to the professional conduct of IT professionals. It focuses in particular on the Code of Conduct of several professional IT societies with reference to the behaviour of their members. The report discusses how these IT societies have attempted to regulate the IT profession so as to safeguard the EMPLOYER from 'cowboy' IT professionals. INTRODUCTION The IT sector has seen more development and change than any other industry to date. The advances in technology have been tremendous and people have become ever increasingly reliant on more and more technology, be it at work or at home. For example, a survey done in 1996 showed that the affect of IT and IT personnel influence major-large scale business performance more than any thing else1. The pattern of advancement has not followed suit as far as IT professionals are concerned, or so it is argued. It has been suggested that whereas people that work in other technology areas such as scientists or medical professionals are expected to follow a somewhat professional code of conduct, the IT professionals don't have anything as definitive to follow. Various arguments have been put forward to tackle why this may seem to be the case. The most prominent opinion seems to be that the IT field is simply too broad for its professionals to be stipulated under one charter. On the other hand some take a more optimistic opinion in that the IT field is still in adolescence when compared to other major fields of work, such as the financial sector or manufacturing. In which case perhaps the IT field will gain more credit and respect once it has matured, just like the other sectors have. Nevertheless, various IT societies such as Association for Computing Machinery (hereafter referred to as ACM), the British Computer Society (hereafter referred to as BCS) ...read more.

THE BCS Code of Conduct & Big Business The BCS 'code of conduct' are a set of rules that members are EXPECTED to abide by. These rules were created to tackle the issue of professionalism in the IT field. The overall aim is to ensure that the BCS member acts professionally and thoughtfully. The BCS code of conduct is split into four parts; the Public interest, Duty to relevant authority, Duty to the profession and Professional competence and integrity. These rules are all intertwined and if observed, will benefit any employer greatly. Member must regard public health and safety at all times. Member must be aware of all legislations concerning the project being worked on, and these legislations must be upheld. Members are also asked not to accept any form of bribery. These rules benefit any business in self-explanatory ways and are not just relevant to the IT professionals, rather, they are generalist and moralistic, hence all workers should keep them in mind. Duty to relevant authority is the concept concerned with respecting authority. The Code stipulates that the member should avoid situations where conflict may rise between the member and the relevant authority. The member must not disclose any confidential information to any one without authorisation from court of law or permission from the relevant authority. The member must not hold back any vital information regarding performance of a product / service or take advantage of the inexperience or lack of knowledge of others. These are essential rules for an IT professional, as they demonstrate some essential characteristics an IT professional should possess and it is highly likely that an employer would find these qualities very desirable in their employees. Duty to the profession is a mixture of ethics and courtesy with professionalism. BCS wish their members to uphold the good standing of BCS and the profession in general. Members are asked to help fellow members in there professional development. ...read more.

The ACM and the IEEE have joined forces recently to put together a Code of Conduct for 'software engineers', this seems fitting with what is generally the next step in 'promoting professionalism' as these IT societies will undoubtedly work better if they combine their knowledge and influence. It also makes more sense to have one, uniform Code of Conduct as opposed to each IT society having its own. BCS is also currently working with various other European IT societies to join forces and work together. This will definitely help these societies in further gaining influence over governments and with businesses, as they will boast greater resources, more members and so greater power! CONCLUSION Having discussed the various ways in which IT societies have tried to promote 'professionalism', it looks like they have taken various steps that will prove very fruitful in the future. In particular, gaining influence over the government and creating links with academic institutions is of great benefit to the IT discipline and future employers, as the IT society and the academic institutions can pass around knowledge on what's hot and what's not! So as to maintain a curricula that is aware of what the market trends require from new recruits. The Code of Conducts are a step in the right direction as well, these help put the employers mind at rest regardless of whether they are implemented by the member or not. Having said that, the only way to improve on this is to some how get legal backing behind these as that will be the ultimate dream come true for any business that has suffered at the hands of unprofessional IT personnel. I mentioned earlier that IT is still a young discipline thus it has quite a way to go before it matures, so having looked at the approaches taken by the various societies the future looks bright because although a lot of work remains to be done, the various IT societies are actively working on improving the quality of their members and this indeed is good news for any employer. ...read more.