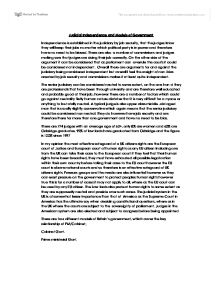 Judicial Independence and Models of Government

Judicial Independence and Models of Government Independence is established in the judiciary by job security, that the judges know they will keep their jobs no matter which political party is in power and therefore have no need to be biased. There are also a number of commissions and judges making sure that judges are doing their job correctly. On the other side of the argument it can be considered that as parliament can overrule the courts it could be considered not independent. Overall there are arguments for and against the judiciary being considered independent but overall I feel the weight of non-bias created by job security and commissions makes it at least quite independent. The senior judiciary can be considered neutral to some extent, on the one hand they are professionals that have been through university and are therefore well educated and probably good at their job, however there are a number of factors which could go against neutrality firstly human nature dictates that it is very difficult for anyone or anything to be totally neutral. ...read more.

Pressure groups and the media are also influential however as they can exert pressure on the government to protect peoples human rights however true this is for a number of cases it may not apply to all, where as the EU court can be used by any EU citizen. The Law lords also protect human rights to some extent as they are supposedly neutral and preside over such cases. The judicial system in the UK is of somewhat lesser importance than that of America as the Supreme Court in America has the ultimate say when deciding constitutional questions, where as in the UK where the courts are subject to the sovereignty of parliament. Judges in the American system are also elected and subject to congress before being appointed There are four different models of Britain's government, which cover the key relationship of PM/Cabinet; Cabinet Govt. Prime ministerial Govt. Presidential Govt. Core executive Cabinet Govt. Prime minister is "first amongst equals". "Primus Inter Pares" Power is distributed equally amongst ministers except for PM. ...read more.

In other words an ideological detachment PM's distance themselves politically from their office and they develop wide support both within the party and the public, cult of being "political outsides" PM may via media coverage - establish a political leadership that bypasses govt, Parliament and Whitehall Media obsession enhances this model to the extent that the PM becomes personification of national concerns- this further enhances their personal standing. Cabinet is subordinate to the PM who has a personal & dominating influence on policy. Collective responsibility still in operation Core executive This is a network at the centre of power consisting of PM, cabinet, cabinet committees, Cabinet office, High ranking civil servants from treasury, home office Power within executive may be perceived as follows: It is in every location within the core not in any one place, it is not equally distributed in every location. It is fluid, not static. Move to do with relationships within the core executive then to do with any one part of it. It therefore varies over time and according to the situation at the time ...read more.