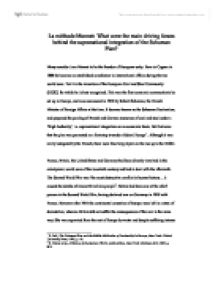 La mthode Monnet: What were the main driving forces behind the supranational integration of the Schuman Plan?

La m�thode Monnet: What were the main driving forces behind the supranational integration of the Schuman Plan? Many consider Jean Monnet to be the founder of European unity. Born in Cognac in 1888 he became an established coordinator in international affairs during the two world wars. Yet it is the invention of the European Coal and Steel Community (ECSC) for which he is best recognized. This was the first economic community to be set up in Europe, and was announced in 1950 by Robert Schuman, the French Minister of Foreign Affairs at the time. It became known as the Schuman Declaration, and proposed the pooling of French and German resources of coal and steel under a 'High Authority', i.e. supranational integration on an economic basis. Dell believes that the plan was promoted as a first step towards a federal Europe1. Although it was really instigated by the French, there were four key players in the run up to the ECSC. France, Britain, the United States and Germany had been directly involved in the cataclysmic world wars of the twentieth century and had to deal with the aftermath. ...read more.

France was undoubtedly the most active of the driving forces behind the supranational integration of the Schuman Plan. Security was clearly a key concern in the midst of warring nations, but there were important economic factors to be considered when investigating French motives for European integration. Monnet claimed that it was a matter of economic survival for France to establish joint control of the Ruhr. European economies were struggling after the war years but Germany had the opportunity to recover using its steel industry. France did not want to fall behind what was potentially the strongest nation in Europe. The aim of the European Coal and Steel Community was 'the establishment of a common economic system', which may be seen as France's guarantee of keeping a check on German economic development. No matter what way the Schuman Plan of 1950 is translated, Monnet believed that pushing for a more concrete economic relationship between the nations would eventually lead to a more established European union politically. His goal was that Europe would ultimately become a federation, thus overcoming the former problem of warring nation-states. Jean Monnet was not the first to come up with the idea of European integration. ...read more.