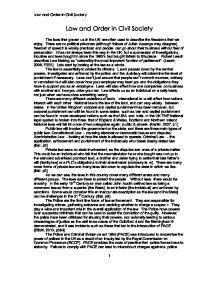 Law and order in civil society. The laws that govern us in the UK are often used to describe the freedoms that we enjoy. There are no political prisoners

Law and Order in Civil Society The laws that govern us in the UK are often used to describe the freedoms that we enjoy. There are no political prisoners (although follows of Julian Assange may disagree), freedom of speech is widely practiced and people can go about their business without fear of persecution. It has not always been this way in the UK, but a succession of investigations, inquiries and laws bought in since the 1980's had bought Britain to this place. Robert Leach describes Law Making as "ostensibly the most important function of parliament". (Leach, 2006, P233). Lets start by looking at the law as a whole. The law is essentially to protect its citizens. Law's passed down by the central powers, investigated and enforced by the police and the Judiciary will determine the level of punishment if necessary. Laws don't just ensure that people can't commit murders, robbery or vandalism but will also cover how your employer may treat you and the obligations they have to support you as an employee. Laws will also affect how one companies do business with another and how you drive your car. Law affects us as an individual on a daily basis, not just when we have done something wrong. There are many different variations of law's. International law will affect how nations interact with each other. ...read more.

(Martin, 2007, p149). PACE affects every police officer in the country, but police forces in the UK are traditionally run as local police forces. The theory behind having a more decentralised approach was to create links to the community being policed and reduce the risk of Police oppression. A more centralised approach was taken with the Police Magistrates' Courts Act (1994) which allowed the Home Secretary to set objectives for all UK police authorities. The power increased further with the Police Reform Act (2002) and the Home Secretary will now produce an annual National Policing Plan which will set strategic policing policies for Police Forces in England and Wales. (Elliott, 2010, p382) The Bichard inquiry into the murders of Holly Wells and Jessica Chapman in 2002 was heavily critical of the Humberside police (ibid, p382). Published in June 2004 the inquiry noted that the failings of the Humberside Police were 'systemic and corporate' (Bichard, 2004, p7). Despite the effects of this report, the Chief Constable of Humberside Police refused to resign. The Home Secretary suspended the Police chief, who challenged the legality of this action. The matter went to court where the Home Secretary's right was upheld. Since the inquiry the Police and Justice Act (2006) has increased the powers of the Home Secretary over the Police. (Elliott, 2010, p382) It is not just the Home Secretary that has powers over the police, but ordinary citizens as well. ...read more.

A second autopsy alleged that Mr Tomlinson had died of internal injuries. (Elliott, 2010, p416). Allegations of Mr Tomlinson being beaten by police prior to the footage of him being forced to the ground by an officer continue, and a full inquiry will begin on 28th March 2011 (www.iantomlinsonfamilycampaign.org.uk - accessed 05/01/11). The debate between police powers and civil rights will continue over the next few years from 2011. The outcome of miscarriages of justice such as the Guildford 4 and the Birmingham 6 led to the introduction of PACE. The Secret Policeman documentary sprung from the MacPherson report into the murder of Stephen Lawrence which called the police "institutionally racist". The death of Ian Tomlinson, as well as the recent clashes between police and demonstrators over university tuition fee's in November and December 2010 and the Police's use of the 'Kettling' technique, has called into question the policing of demonstrations. With more demonstrations planned for 2011 as well as the results inquiry into the death of Ian Tomlinson, police power and accountability will debated again. The simple truth is that police officers need the rational-legal authority to investigate and prevent criminal action. Without it they could not effectively enforce the law. None the less, civil liberties that many people have fought and died must be protected. Malcolm Davies is right when he says that "legislation on police powers must balance conflicting needs of crime prevention and due process" (Davies, 2007, p153). ...read more.