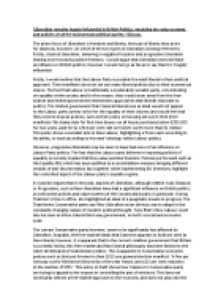 Liberalism remains hugely influential in British Politics, moulding the value systems and policies of all the mainstream political parties. Discuss.

﻿?Liberalism remains hugely influential in British Politics, moulding the value systems and policies of all the mainstream political parties.? Discuss. The prime focus of Liberalism is freedom and liberty; the type of liberty they strive for depends, however, on which of the two types of Liberalism is being referred to. Firstly; classical Liberalism, believing in negative freedom and progressive Liberalism leaning more towards positive freedom. I would argue that Liberalism does still have an influence in British politics; however I would not go as far as to say that it is ?hugely? influential. Firstly, I would outline that the Labour Party is possibly the least liberal in their political approach. Their manifesto does not set out many liberal policies due to their economical stance. The fact that Labour is traditionally a moderately socialist party, concentrating on equality within society and for this reason, they would steer away from the free-market and limited government intervention approaches that liberals may take to politics. The limited government that Classical liberals see as ideal would not appeal to the Labour party as they strive for the equality ...read more.

During Thatcher?s time in office, she highlighted an ideal of a pragmatic means to progress. The Thatcherite Conservative party saw Neo-Liberalism as an obvious way to adapt to the constantly changing nature of modern political thought. Tony Blair?s New Labour could also be seen as a Neo-Liberal third way government, on both a social and economic scale. The current Conservative party however, seem to be significantly less affected by Liberalism. Arguably, the free-market ideals that Cameron appears to hold are seen as Neo-Liberal; however, it is apparent that in the current coalition government that Britain is currently led by, this free-market and Neo-Liberal philosophy has been limited to the catch-all demands of mainstream politics. This is apparent in Conservative economic policies such as that put forward in their 2010 pre-general election manifest: ?A five per cent pay cut for Ministers followed by a five-year freeze, and a 10 per cent reduction in the number of MPs.? This policy in itself shows how Cameron?s Conservative party are trying to appeal to the masses in controlling the pay of ministers. ...read more.

Progressive Liberalism can be seen clearly in certain aspects of their recent policies, on education for example: ?Cutting class sizes to ensure children get the individual attention they need.? This is a fine example of how the Liberal Democrats would like to impose positive liberty and freedom on its citizens; cutting class sizes would increase individual attention and therefore arguably create more freedom and liberty for pupils in the long-term. It could also be argued however, that the Liberal Democrats are no longer such a liberal party, but more of a third way political party; much like the Conservative and Labour parties who have shifted towards the centre of political ideals and values in order to also become more ?catch-all? and appeal to the masses. In conclusion, I would argue that broadly Liberalism is not hugely influential in British politics as a whole and does not necessarily mould the value systems and policies of all the mainstream political parties. However, I would argue that liberalism still remains influential in certain specific parts of each party?s policies and value systems; therefore remaining an influential force, to an extent, in British politics. ...read more.