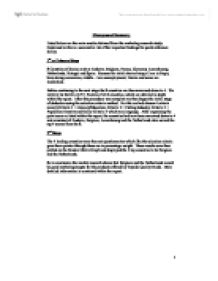 Listed below are the main results obtained from the marketing research study. Contained in this is a summative list of the important findings for quick reference ability.

Management Summary Listed below are the main results obtained from the marketing research study. Contained in this is a summative list of the important findings for quick reference ability. 1st or Primary Stage 8 Countries of choice exist as Andorra, Belgium, France, Germany, Luxembourg, Netherlands, Portugal and Spain. Reasons for initial choice being all are in Eurpe, have strong economies, middle - low unemployment, literate and some are landlocked. Before continuing to the next stage the 8 countries are then narrowed down to 4. We initially list the S.L.E.P.T. Factors of all 8 countries, which are detailed in depth within the report. After this procedure was complete we then began the initial stage of deduction using the selection criteria method. For this we had chosen 4 criteria namely Criteria 1 = Literacy/Education, Criteria 2 = Fishing Industry, Criteria 3 = Population Density and finally Criteria 4 which was language. After organising the point score as listed within the report, the countries had now been narrowed down to 4 and consisted of Andorra, Belgium, Luxembourg and the Netherlands who scored the top 4 scores from the 8. 2nd Stage The 4 leading countries were then set questionnaires which like the selection criteria gave them points although these are in percentage weight. These results were then plotted on the Boston Matrix Graph and displayed the 2 top countries to be Belgium and the Netherlands. So in conclusion the market research shows that Belgium and the Netherlands would be good marketing targets for the products offered by Tayside Quality Foods. More detailed information is contained within the report. Introduction For the purpose of this marketing assessment we are beginning with 8 countries, this enables us to have a larger scope to select from and thus the results are more definitive because 8 countries are researched before finally narrowing them down to 2. The chosen 8 countries are Andorra, Belgium, France, Germany, Luxembourg, the Netherlands, Portugal and Spain. ...read more.

In order to do this we have to use the Boston Matrix Graph using the questionnaire for each country. This should give us a good idea of market attractiveness and competitive strength. 40 NETHERLANDS BELGIUM LUXEMBOURG ANDORRA 30 20 10 0 Conclusion After going through our selection methods Belgium and the Netherlands have come out on top. They both have a high population density and therefore good sales potential. Although they are not the largest countries in Europe they are potentially easier to meet demand for because they have an average overall population and therefore a good starting choice before expanding into other countries. The market is also a little less competitive than say in France or Spain. Luxembourg and Andorra also had potential although there were not enough secondary statistics available to offer a clearer picture for risks etc. It would have been necessary to collect primary statistics and therefore too costly. Belgium and the Netherlands have great potential for Tayside Quality Foods as their product life cycle would be extended and as well as this their market will increase thus creating more opportunity and profit. They can both be reached quickly and easily via. Ferry from the UK and transportation costs etc. will be less than say transportation to Portugal. There would generally be less market risks to take in Belgium or the Netherlands. Marketing will have to approached using different languages and also taking into account for the different cultural and religious practices. In the Netherlands religion is perhaps less of an issue as the higher percentage is unaffiliated although they should still be respected and considered in order not to offend the potential market place. We shall also still have to examine any legal and political codes of practice to be followed. The next stage is now to assess how to enter the new market and cross the next hurdle. ...read more.