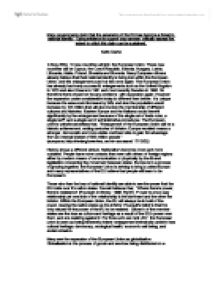 Many governments claim that the expansion of the EU has become a threat to national identity. Using evidence to support your answer, critically assess the extent to which this claim can be sustained.

Many governments claim that the expansion of the EU has become a threat to national identity. Using evidence to support your answer, critically assess the extent to which this claim can be sustained. Katie Clarke In May 2004, 10 new countries will join the European Union. These new countries will be Cyprus, the Czech Republic, Estonia, Hungary, Latvia, Lithuania, Malta, Poland, Slovakia and Slovenia. Many European citizens already believe that their national identity is being lost within the European Union, and this enlargement puts it at risk once again. The European Union has already had many successful enlargements such as the United Kingdom in 1973 and also Greece in 1981 and most recently Sweden in 1995. So therefore there should not be any problems with expansion again. However the expansion under consideration today is different then before. It is unique because the area would increase by 34% and also the population would increase by 105 million that will also involve the membership of different cultures and histories. Eastern Europe and the Balkans would benefit significantly by the enlargement because of the single set of trade rules, a single tariff, and a single set of administrative procedures. ...read more.

In its most contemporary and widely perceived form, globalisation is often considered to be the increasing interconnectedness of people and societies across the world, and the coming of a 'global village'. The term global village suggests oneness, a shared community, language, culture and currency. In effect it is what the EU is striving for: unity and strength found in uniting with one's neighbours. As the example of the European Union shows, it is not just the world economy that is now subject to globalisation, but also virtually all issues with which the traditional nation state has been concerned. It is perhaps as a result of increased world trade that culture is becoming 'global', with trends in the worlds of entertainment, fashion and leisure extending as far as from the USA to Russia, Australia and Japan. The many different languages of the European Union makes communication difficult and widens the gap between regions. With 12 members there are 9 official languages in normal use; however if there are 30 members then there could be up to 25 languages in use. "Language continues to be seen as an important element of national identity; it is accorded such political and social importance that the participants in the EU are willing to devote enormous resources to ensure the national languages are not displaced by English and French." ...read more.

Globalisation has long been making nationalism out of fashion, and creating a global market. This process has gone too far to stop now as places and distences become of fadeing importance and the non-place, and cyber space becomes an important part of modern culture. The European Union's enlargment is just one example of how globalisation is taking place across the globe, bringing together nations; reuniting neighbours once at war. Of course globalisation does not signal the end of other social spaces. The rise of the global village does not eliminate the significance of localities, countries, and regions. Nor does the spread of trans-world connections abolish territorial governments or dissolve territorial identities. The global coexists and interrelates with the local, the national, the regional, and other dimensions of geography. Foucault, cited in Storey, John, 1998, Introduction to Cultural Theory, University of Georgia Press. Hoffman, Stanley, 1998, Obstinate or Obsolete?, in The European Union readings on the theory and practice of European integration, 2nd edition, ed's Nelson, B.F., and Stubb, C.G. McMillan Press USA. Sanguin, Andre-Louis, 1998, The geography of languages in Switzerland, in A European Geography, ed T. Unwin, Longman, Essex. The European Union online, [online] available from europa.eu.int/pol/enlarg/overview_en.htm [accessed 17th December 2003] Unwin, Tim, 1998, 'European Futures' in A European Geography, ed T. Unwin Longman, Essex. ...read more.