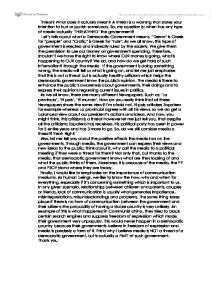 Threat? What does it actually mean? A threat is a warning that states your intention to hurt or punish somebody. So, my question is: when has any type of media actually ‘THREATENED’ the government?

Let’s talk about what a Democratic Government means. “Demo” is Greek for “people” and “Cratic” is Greek for “rule”. As we all know, this type of government is elected and indirectly ruled by the society. We give them the permission to use our money on government spending. Therefore, shouldn’t we have the right to know where OUR money is going, what is happening to OUR country? We do, and how do we get hold of such information? through the media.  If the government is doing something wrong, the media will tell us what is going on, and let me just emphasise that this is not a threat but is actually healthy criticism which helps the democratic government know the public's opinion. The media is there to enhance the public’s awareness about governments, their doings and to express their opinions regarding current issues in politics.

As we all know, there are many different Newspapers. Such as: ‘La provincia’, ‘El pais’, ‘El mundo’. Now do you really think that all these Newspapers share the same view? I’m afraid not. El pais criticises Zapatero for example whereas La provincial agrees with all his views, so we do get a balanced view about our president’s actions and ideas. And now, you might think, this critisism is a threat however let me just tell you, that despite all the criticisms Zapatero has received, his political party has been in power for 5 entire years and has 3 more to go. So, do we still consider media a threat? Yeah Right!

Also, let me tell you about the positive effects the media has on the governments. Through media, the government can express their views and new ideas to the public; think about it, why call the media to a political meeting if they were a threat for them? Not only that, but thanks to the media, that democratic government knows what are they lacking of and what the public thinks of them. Moreover, it is because of the media, the PP and PSOE stand where they are today.

Finally, I would like to emphasise on the importance of communication mediums. As human beings, we like to know the how, why and when for everything, especially if it’s concerning something which is important to us.  In any given scenario, relationships between children and parents, couples or friends, lack of communication is usually what generates impatience, misinterpretations, misunderstandings and problems. The same thing takes place if there is no form of communication between the government and their citizens the probability of having a stable country is very unlikely. An example of this is what happened in Communist china, they tried to block certain search engines and suppress freedom of expression which made their government very unpopular. This would never happen in a democratic country because their governments believe in freedom of expression and media is precisely a form of it. This is why I believe media is NOT a threat of a democratic government, but is actually a PART of such government.