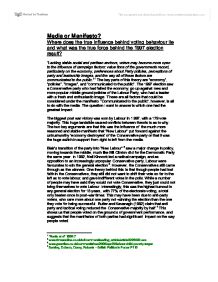 Media or Manifesto? Where does the true influence behind voting behaviour lie and what was the true force behind the 1997 election result? "Lacking stable social and partisan anchors, voters may become more open to the influence of campaign factors: valuations of the governments record, particularly on the economy, preferences about Party policies, perceptions of party and leadership images, and the way all of these factors are communicated to the public."1 The key parts of this theory are "economy", "policies", "images", and "communicated to the public". The 1997 election saw a Conservative party who had failed the economy, go up against new and more popular middle ground policies of the Labour Party, who had a leader with a fresh and enthusiastic image. These are all factors that could be considered under the manifesto. "Communicated to the public", however, is all to do with the media. The question I want to answer is which one had the greatest impact. The biggest post war victory was won by Labour in 1997, with a 179 vote majority. This huge landslide caused conflicts between theorists as to why. The two key arguments are that this was the influence of the much more reasoned and stable manifesto that "New Labour" put forward against the untrustworthy 'economy destroyers' of the Conservative party or that it was the huge switch in support from right to left from the media. Blair's transition of the party into "New Labour"2 saw a major change in policy, moving towards the middle, much like Bill Clinton did for the Democratic Party the same year. ...read more.

Labour lost an election they were expected to win to a party under criticism from even its own supporters, and then set election winning records 5 years later with new policy and general party ideology. This would suggest that manifesto is key to the way the electorate votes. The Sun is the country's biggest selling newspaper, with a circulation of 3.3 million. In 1992, they were, as they traditionally always had been, in favour of the Conservative party. The morning of the general election that Neil Kinnock had been expected to win, the Sun released the headline "If Kinnock wins today, will the last person to leave Britain please turn out the lights". Two days after the shock Conservative win The Sun was so convinced its front page had swung the result they published the new headline, "It's The Sun Wot Won It".10 The paper's pride in twisting the fate of UK politics shows the relentless force of the media. It is not just the Sun however, and though they have supported the winning party in all but 3 elections in the past 50 years, Labour have never won an election when its press share was more than 18% behind the Conservatives.11 The sun switched support to Labour on 18 March 1997, with the front page headline "THE SUN BACKS BLAIR". This switch marked the first time ever in which the Labour party had the support of most of the national daily newspapers. In 1992, it was 70% to 27% in favour of the Conservatives, in a time where 80% of the working class read tabloids, and most Labour supporters were exposed to a Tory newspaper. ...read more.

However, though media has more of the limelight, and was claimed so strongly to have swung the 97 election, its role is not to do with voting behaviour. The electorate cried out for a Tony Blair, and when he came with his "third way", and formed "new labour", they got what they wanted. The media followed suit and though its support may have swung in favour of Labour behind the scenes, the new face of the Sun was created in order to appeal to its consumers. Murdoch's influence on policies was as a result of Blair's desire for popularity among 'Middle England' in general, not as a desperate attempt to win the election. However, though I've come to this conclusion, I still believe the media play a big role in UK politics. Media have a similar effect on politics as pressure groups; they set the agenda and seek to influence the policies of parties. The greatest influence the media have in politics is influencing parties to alter their policies to support their, and the electorate's popular opinion. However, they also seek to gain profit and this can alter their presentations of the parties, through sensationalisation. Media can manipulate their reports on policies and ideologies but they cannot invent them; there has to be an element of truth in all articles and columns. This, along with the fact that the media are attempting to reflect the views of the electorate, mean that it is the performance of the parties, the ideologies they support, and the manifestos they put forward that influence voting behaviour. ...read more.