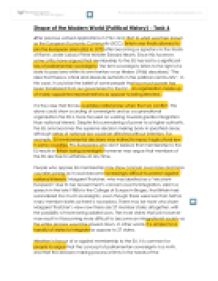 Membership to the EU and Loss of Sovereignty

Shape of the Modern World (Political History) - Task 6 After previous vetoed applications in 1961 and 1967 to what was then known as the European Economic Community (ECC), Britain was finally allowed to join the European Union (EU) in 1973 after becoming a signatory to the Treaty of Rome, under Labour Prime Minister Edward Heath. Since this however, some critics have argued that membership to the EU has led to a significant loss of parliamentary sovereignty. The term sovereignty refers to the right of a state to pass laws within its own territory or as Hinsley (1966) described, "The idea that there is a final and absolute authority in the political community". In this case, it could be the belief of some people that too much power has been transferred from our government to the EU - an organisation made up of mainly appointed representatives as oppose to being elected. ...read more.

College of Europe in Bruges, that Britain had surrendered too much sovereignty, even though there were less than half as many member states as there is nowadays. There may be more who share Margaret Thatcher's view now there are 27 member states altogether, with the possibility of more being added soon. The more states that join however may result in it becoming more difficult to become an integrationist society as the entire process would be slowed down. In other words, it is simpler for a handful of states to integrate as oppose to 27 states. Whether in favour of or against membership to the EU, it is common for people to argue that the concept of parliamentary sovereignty is a myth, and that the decision making process is firmly in the hands of the Government instead of parliament. ...read more.

For example, large international organisations such as General Motors could be seen as above national law as they can decide where in the world they want to locate, and parliament will want them in our country providing jobs etc. The organisation may therefore be able to negotiate the terms in which they base themselves in the UK which undermines sovereignty. Also, with people being able to freely move from country to country and even access the globe via the internet, it has become increasing difficult to control what goes on it the country. The growth of terrorism, which is present around the world, provides an enormous threat to a lot of nations and their sovereignty, whilst a rise in human rights has also restricted authority and put more power in the hands of the people. If it's true what some people believe, and that parliamentary sovereignty is a myth or just an outdated concept, then membership to the EU cannot sacrifice it. ...read more.

4/5 This is a good essay. It makes a number of relevant points, communicates a good amount of information, and is well written. It would benefit from a stronger structure and argument communicated in the introduction and throughout. It could also benefit from more detailed consideration of the meaning of sovereignty, and potential benefits of surrendering or pooling it (and, which it is in the case of the EU).