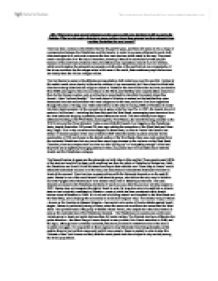 Middle east conflict - There have been several attempts to bring peace to this area but there is still no end to the fighting. What are the main obstacles to peace and how have these stopped previous attempts from working (including the most recent)?

A03: "There have been several attempts to bring peace to this area but there is still no end to the fighting. What are the main obstacles to peace and how have these stopped previous attempts from working (including the most recent)? There has been violence in the Middle East for the past 60 years, and there still seems to be no hope of a compromise between the Palestinians and the Israelis. In order for a peace settlement to work, both sides must agree to it, and must overcome the four main barriers which stand in the way. They must reach a compromise over the city of Jerusalem, showing it should be controlled by both peoples because of the joint history between them, the attitudes and expectations should try to be fulfilled, which would destroy the extremist movements on both sides of the conflict, but more importantly, it has to see a solution for the refugee crisis in this area of the world, that sometimes people believe are less deadly than the African refugee crisises. The first barrier to peace is the attitudes and expectations both sides have over this conflict. I looked at this section much more closely in the earlier sections of my coursework, but I have found out that both sides have strong historical and religious claims to Palestine- the Jews believe the land was promised to them 4000 years ago by God, from evidence in the Bible, and that they were unjustly taken away from them by the Roman invaders, and now they have come back to claim their homeland where they formed - their "cultural identity". The Arab claim to Palestine is centred on the fact that they were descended from the earliest tribes who were indigenous to this area, and have lived here regardless through the years of foreign rule. Both sides believe in the idea of owning 100% of Palestine to create into their ideal homeland. ...read more.

only solution is Israel without Arabs- the country will be able to absorb millions of our brothers and the Jewish question will be solved once and for all". More and more Palestinians have fled Israel due to the gains of the 1967 six day war, when the Gaza Strip and the West Bank was occupied and conquered by Jews. Over the past 40 years, the plight of the Refugees have been known by all nations who believe in the human rights of all peoples. Resolution 242 states that the occupation of the Arab areas is illegal, but the Jews have not listened to their warnings. The Living conditions of the Refugees are terrible- they are treated as outcasts by the Arabs, who believe that "each Arab should defend their homes and should not be afraid of the Jewish invaders" and the Israelis believe the fault lies with the Arab nations who are too proud to take any of the Refugees into their land- "Arab leaders exploit the Arab Refugees for the purposes of their political war against us. They do not look upon the refugees as human beings, but as one of the instruments of war against Israel- Golda Meir 1962." The majority of the Arab nations are wealthy, and some have sent aid to the camps in Jordan, but really, the Arabs have gained much sympathy over the crisis, and the Israelis have been shamed for their part in the conflict. The state of Israel refuses to allow Palestinian refugees to exercise their rights. This refusal is based on a denial of responsibility for the creation of the refugee problem and of the perceived consequences of the return of refugees. Three main arguments are put forward: * There is no space in Israel for the refugees to return. According to recent research, 78% of the Jewish population of Israel resides on 15% of the land. ...read more.

They have a sense of motivation and mission, knowing that the Arafat movement has become too peaceful in recent times, and are set to continue this rebellion with the Israeli troops occupying their land illegally. Meanwhile, the Israelis no longer see anything to be gained from the peace negotiations. The Refugees would flood the Palestinian lands and ask for even more aid from the UN to build the housing and government system capable of dealing with the influx of the poorest Arab nation in the Middle East. Then there is the risk of invasion from the Arabs if they gain extra power in the region. The majority of the problem lies with the mistrust and religious hatred of the earlier parts of the Arab- Israeli conflict. The tensions of the creation of Israel fuelled the Refugee problem, dispelling the families which had inhabited this area of land for thousands of years. The Extremists of every generation were created by the experience they had under the corrupt British leadership. The Palestinians have blamed the British for continued favouritism with the Jews, based more around their wealth than creating a friendship with the people who have always lived in the lands. The violence comes from a vicious circle of despair for the poor in these regions, there are constant terrorist attacks on the borders of Israel, and there are always retaliations for the death toll of each nation, and this "climate of fear" creates the terrorist threat in this small, but important region. However, as the Refugee problem and the Extremists are more of a modern problem, the attitudes and expectations of each side have belittled any attempt at a peace process. Both sides will always want 100% control of the land, and complete control of their Capital City - Jerusalem, due to its religious significance. Indeed, I believe that the beliefs of the Arabs would be too suppressed if a peace deal was reached, and the Israelis would lose out from a peace deal, having to give up large areas of land for a people they no longer believe to exist. ...read more.