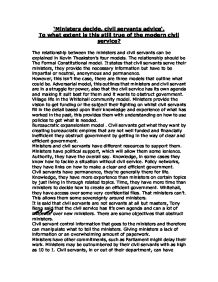 Ministers decide, civil servants advice. To what extent is this still true of the modern civil service?

'Ministers decide, civil servants advice'. To what extent is this still true of the modern civil service? The relationship between the ministers and civil servants can be explained in Kevin Theakston's four models. The relationship should be The Formal Constitutional model. It states that civil servants serve their ministers, they provide the necessary information but have to be impartial or neutral, anonymous and permanence. However, this isn't the case, there are three models that outline what could be. Adversarial model, this outlines that ministers and civil servant are in a struggle for power, also that the civil service has its own agenda and making it suit best for them and it wants to obstruct government. Village life in the Whitehall community model. Ministers provide the vision to get funding or the subject their fighting on whilst civil servants fill in the detail based upon their knowledge and experience of what has worked in the past, this provides them with understanding on how to use policies to get what is needed. ...read more.

It is said that civil servants are not servants at all but masters, Tony Benn said that the civil service has it's own agenda and can a lot of influence over new ministers. There are some objectives that obstruct ministers. Civil servant control information that goes to the ministers and therefore can manipulate what to tell the ministers. Giving ministers a lack of information or an overwhelming amount of paperwork. Ministers have other commitments, such as Parliament might delay their work. Ministers may be outnumbered by their civil servants with as high as 10 to 1. Civil servants, in or out of their department, can have informal gatherings and decide what to say to their minister, and watch ministers fail. Overwhelming work load can make a minister feel that they have been cut off from reality outside their departments. Ministers can decide to go 'native' and nothing will be done. ...read more.

They have two major roles. They help to make government less reliant and more independent on the work of the civil service. They also help the Prime Minister keep up to date on what is happening in departments. They play a key role in government. Labour used a lot of special advisers from 1997 by 2003 hundred and eight, twenty-seven prime ministerial and eighty-one government advisers, with only five in 1990. They face a lot of criticism in the way they serve political-party. As they are funded by the taxpayer. They got known as Spin Doctors. They had conflicting objectives, there was a lot of scandals involving special advisers in the 1990s and party's promise to stick to policies they have already made. It said that the party was spinning out of control. A famous example of problems with a special adviser would be Jo Moore. She is Stephen Byers' media advisor. She said 'good day to bury bad news'. On the day of the 9/11. She had to later on apologise for sending such an email and eventually in time, resigned. ...read more.