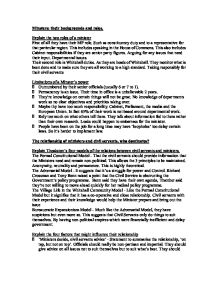 Ministers; their backgrounds and roles.

Minsters; their backgrounds and roles.

Explain the two roles of a minister

First of all they have their MP role. Such as constituency duty and to a representative for that particular region. This includes speaking in the House of Commons. This also includes Cabinet responsibilities if they are senior party figures. Arguing for any issues that need their input. Departmental issues.

Their second role is Whitehall duties. As they are heads of Whitehall. They monitor what is been done and to make sure they are all working to a high standard. Taking responsibly for their civil servants

Limitations of a Minster’s power

The relationship of ministers and civil servants, who dominates?

Explain Theakston’s four models of the relations between civil servants and ministers.

The Formal Constitutional Model - That the civil servants should provide information that the Ministers need and remain non-political. This allows the 3 principles to be maintained. Anonymity, neutrality and permanence. This is highly theoretical.

The Adversarial Model - It suggests that it’s a struggle for power and Control. Richard Crossman and Tony Benn raised a point that the Civil Service is obstructing the Government’s policy programme.  Benn said they have their own agenda, Thatcher said they’re not willing to move ahead quickly for her radical policy programme.

The Village Life in the Whitehall Community Model - Like the Formal Constitutional Model but it signifies that it has a co-operative and close relationship. Civil servants with their experience and their knowledge would help the Minister prepare and bring out the issue

Bureaucratic Expansionism Model - Much like the Adversarial Model, they have suspicions but even more so. This suggests that Civil Servants only do things to suit themselves. By having non-political empires which were financially inefficient and delay government.

Explain the four factors that might influence their relationship

What advantages do civil servants have over ministers?

What is individual ministerial responsibility

If something has gone wrong in their departmental they take full responsibility. It’s a constitutional convention. Ministers are answerable to Parliament.

Why does it seem to be in decline?

They are going closer to cabinet collective responsibility, which makes all ministers have the same views and making it easier to pass policy. Also making it clear and coherent.

A team if that’s the word. They all say the same thing to the public so there are no complications, unless of course, leaks. There have been 2 cases of IMR such as Thomas Dugdale over the Crichel Down affair and Lord Carrington over the outbreak of the Falklands war.

Why do ministers resign?