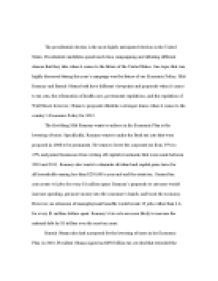 Mitt Romney and Barack Obama both have different viewpoints and proposals when it comes to tax cuts, the reformation of health care, government regulations, and the regulation of Wall Street;

﻿The presidential election is the most highly anticipated election in the United States. Presidential candidates spend much time campaigning and debating different stances that they take when it comes to the future of the United States. One topic that was highly discussed during this year?s campaign was the future of our Economic Policy. Mitt Romney and Barack Obama both have different viewpoints and proposals when it comes to tax cuts, the reformation of health care, government regulations, and the regulation of Wall Street; however, Obama?s proposals illustrate a stronger stance when it comes to the country?s Economic Policy for 2012. The first thing Mitt Romney wants to enforce in his Economic Plan is the lowering of taxes. Specifically, Romney wants to make the Bush tax cuts that were proposed in 2008 to be permanent. He wants to lower the corporate tax from 35% to 25% and permit businesses from writing off capital investments that were made between 2010 and 2011. Romney also wants to eliminate dividend and capital gains taxes for all households earning less than $250,000 a year and end the estate tax. ...read more.

Romney seems to favor the businesses more in this case than the people that would actually benefit from having good health insurance. In contrast to RomneyCare, ObamaCare is much more about the people. Obama did include an employer penalty for any employers that did not provide health insurance to their employees and there was no ?opt out? provision. Obama?s intent is a step towards government run insurance. He plans to increase taxes by $500 billion and cut Medicare by $500 billion and the overall costs are still unknown. The rising costs of ObamaCare threatened to outstrip Medicare?s ability to pay for it and contributed to 50% of all bankruptcies. Although Obama?s stance on healthcare is an unpopular one due to the rising expenses that come along with it, ObamaCare was created with one thing in mind, to help those in need. Many people that don?t have health insurance need it, and ObamaCare can make that possible for them. Although his healthcare bill is not as ?business-friendly? as RomneyCare, it still provides many opportunities for those in need of health insurance and it shows how much Obama cares for the citizens of this country. ...read more.

But, it would ultimately increase the national debt to $1 trillion over the next ten years. In contrast to Romney, Obama?s proposal for tax cuts proposes a higher tax on dividend income of the wealthiest taxpayers. This will ultimately raise about $206 billion over the next ten years, making Obama?s plan much more effective. When it comes to health care, RomneyCare seems to be a more conservative and ?business-friendly? reform system. ObamaCare on the other hand, focuses more on helping the people and being more liberal when it comes to creating opportunities for those that don?t already enjoy health care. Although ObamaCare is more controversial, it was made ultimately to help those that need health care. Romney also proposed many government regulations. Although these regulations seem to be effective, they will ultimately contribute to a further economic crisis. When Obama passed his bills for the regulation of Wall Street, there was much controversy. But his bill will help more people make better financial decisions, which will eventually help to improve our economic state. Although Mitt Romney has his own unique vision when it comes to America?s Economic Policy, Barack Obama?s proposals and ideas are far more effective and positive when trying to improve the United States? Economy. ...read more.