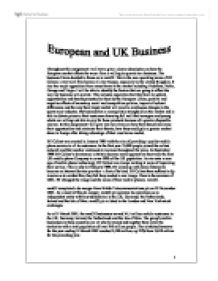 MM02 - How the European market affects the way a firm is willing to operate as a business.

Throughout this assignment I will try to give a clearer description on how the European market affects the way a firm is willing to operate as a business. The business I have decided to focus on is mmO2. This is the new operating name of BT Cellnet, a very well firm known all over Europe, especially in the United Kingdom. It also has major opposition from many forms in the market including Vodafone, Nokia, Orange and Virgin. I will be able to identify the factors that are going to affect the way my business will operate. This includes legislation that they have to uphold, opportunities and threats presented to them by the European Union, positive and negative effects of monetary, social and competition policies, impact of cultural differences and the way their target market will react to continuous changes in the sports wear industry. My business has a monopolistic stronghold on the market and is able to dictate prices to their customers knowing full well that teenagers and young adults are willing and able to pay for these products because of a greater disposable income. In this assignment I will give my own views on how they should maximise their opportunities and minimise their threats, how they could gain a greater market share in Europe after taking advantage of their own home market. BT Cellnet was created in January 1985 with the aim of providing a quality mobile phone service to all its customers. In the first year 25,000 people joined the cellnet network and that number continued to increase throughout the years. In September 1998 BT Cellnet's dominance in Britain became more apparent as they were the first UK mobile phone Company to cover 99% of the UK population. As we enter a new age of mobile phone technology, BT Cellnet are always looking at ways of improving their service. This is why in February 1999, BT joined up with Genie Internet to become an Internet Service provider- a first of its kind. ...read more.

It also introduces new laws on the free movement of peoples, which includes variations to visas, asylum and immigration within the EU. The Union and the citizen There are several ideas which will be used to help the improve the lives of the citizens within the EU: > The development of the concept of the European citizenship, with additions to their current civil rights and a link between their national and European citizenship. > The incorporation into the Treaty establishing the European Community of a stronger social agreement with a commitment to tackle social exclusion and uphold equality between men and women. > An improvement in the instruments available to the European Union for promoting higher standards of public health. > The clarification of the aims of consumer protection policy and better integration of the measures taken in this area with other policies. Effective and coherent external policy This section includes two sections, an economic one dealing with extending the scope of the common commercial policy, and a political one on the reform of the common foreign and security policy (CFSP) The economic section elucidates the challenges and practicalities of extending the scope of the common commercial policy to include international agreements on services and intellectual property rights. The section on the common foreign and security policy looks at the following reforms: > The creation of a new instrument: the common strategy; > Improved decision-making thanks to greater use of qualified majority voting in the council; > The establishment of a policy planning and early warning unit to encourage joint analysis of international developments and their consequences; > The creation of the post of High Representatives for the common foreign and security policy to give the CFSP greater prominence and coherence; Institutional Questions This section explains the institutional reforms envisaged by the Amsterdam Treaty with a view to the enlargement of the European Union. ...read more.

Substitute products. The danger with substitute products, like CD players and the new Digital videodiscs (DVDs) is that they often seem to come out of nowhere. We must be aware of new substitutes such as pagers, which could become more popular with consumers. Exchange rate volatility- today, even a local business can be affected by global economic forces, including exchange rates. When the British pound was rising against all major currencies, for example, British companies were almost drowned in a flood of cheaper foreign imports. The recent weakness in the pound has been a boon for exports in certain industries, but for others, the costs of materials and components have risen. Shortages of raw materials- from an oil crisis to the shortage of memory chips, supply problems can threaten a business. Companies often enter into long-term contracts to minimise these disruptions, but extended agreements pose their own set of risks. If this happens we may have to cut our supply for a short time so we can find other forms of production. Loss of patent protection- Creativity and intellectual property are usually protected by copyrights and patents. But patents expire, and companies must prepare for the competition that inevitably follows. Although mmO2 have a patent on the Internet phone, they must be aware that the idea maybe used by other firms in the future Labour agreements. Unions have a significant impact on the cost of doing business, and companies in various industries have learned how to factor in their particular relationships with organised labour. Although union activity has been on the decrease, companies that have no union histories may have to come to terms with organised workers in the future. Laziness and complacency- It's easy to get lazy when the money starts rolling in, and the list of companies that have fallen into the complacency trap is quite considerable. We must be aware of any threats imposed on us and make sure that we respond to the threats. ?? ?? ?? ?? 3 1 ...read more.