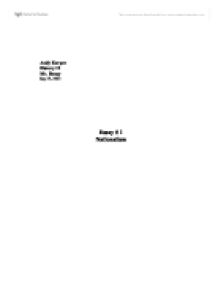 Nationalism in the Middle East

Andy Karpov History 12 Mr. Benoy Sep 23, 2002 Essay # 1 Nationalism Nationalism Essay When thinking of the Middle Eastern conflicts, the common knowledge is that these conflicts originated in biblical times, which I think to be wrong. According to Rashid Khalidi, "The situation in the Middle East is not so different from the recent history of Europe, where the upsurge of nationalism in the nineteenth century fueled conflicts that culminated in two world wars. And just as modern nation-states like France and Germany have manufactured pedigrees that stretch back centuries; nationalists in the Middle East have crafted narratives to support their own claims to power."[1][1] Nationalism is often defined as the feeling which unites people with common descent, language, or religious background; this feeling often causes people to unite and abolish foreign rule over their own affairs. Nationalism is a very strong power with great prospects to do either good or bad depending on the degree of nationalism and the side of argument looked at. Nationalism was a chief driving force in the creation of the state of Israel and throughout the 20^th century shaped politics and caused many conflicts in that region. ...read more.

Another cause for Arab attacks on Israel is the fact that Jerusalem, which was included in the territory of Israel, Is a central and a very important city for three main religions: Christianity, Judaism, and Islam, the latter of which is the religion of the Arab nations surrounding Israel. Hence, we can see the natural drive of these nations to unite in support of each other and try to gain control over that area. One such occasion came on May 15, 1948; a day after the foundation of the state of Israel an invasion of Iraq, Egypt, Saudi Arabia, Lebanon, Jordan, and Syria took place. Israel, due to better organization, training and morale managed to hold out to the attacks and even take over some territory. When fighting stopped in January 1949, "Israel held the 5,600 square miles allotted to it by the UN partition plan plus an addition 2,500 square miles. Transjordan held the eastern sector of Jerusalem and the West Bank and Egypt held the Gaza Strip."[3][3] This victory furthermore increased Israeli nationalism feeling, by that causing many Israeli people to feel superior to the populace of the Arab states around them, and will to take over more territory surfaced. ...read more.