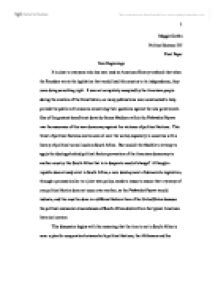 Meggie Gerfen Political Science 215 Final Paper New Beginnings It is clear to everyone who has ever read an American History textbook that when the Founders wrote the legislation that would lead this country to its independence, they were doing something right. It was not completely accepted by the American people during the creation of the Constitution, so many publications were constructed to help provide the public with answers concerning their questions against the new government. One of the greatest benefits set down by James Madison within the Federalist Papers was the assurance of this new democracy against the violence of political factions. This threat of political factions can be seen all over the world, especially in countries with a history of political turmoil such as South Africa. But would it be feasible to attempt to apply the ideology behind political faction prevention of the American democracy to another country like South Africa that is in desperate need of change? Although a republic does already exist in South Africa, a new development of democratic legislation, through a process similar to a joint veto policy, needs to ensue to ensure that a tyranny of one political faction does not occur over another, as the Federalist Papers would indicate, and this must be done in a different fashion than of the United States because the political and social circumstances of South Africa deviate from the typical American historical context. This discussion begins with the reasoning that the time to act in South Africa is now: a plan for cooperation between both political factions, the Afrikaners and the African populations, is completely and utterly necessary in order for South Africa to successfully grow as an undivided nation. Why is now the time to act the reader may ask? This is simple: because South Africa has had its independence for over a decade and there seems to be no fundamental change from the beginning of the post-apartheid era. ...read more.

This point can be justified through the idea that with a double-veto system in place, the entire body of the South African government would have to purposefully review proposed legislative bills in fear of tyrannical majority power of a faction. In some cases, it could also be argued that with the implementation of this system, it could be inferred that the general public would take note of the additional attention to the legislative process and become interested in the law-making procedures themselves. In other words, if more attention is brought to an issue than before, then more people will be interested in its justification within the government. With this type of ideology in practice through the support of a double-veto system, we could say that politicians with a one-sided agenda in correspondence to a particular faction, say the African National Congress, would be unable to prosper, thus resulting in a more general undertaking of the common good. It just comes down to maximizing the potential that can be derived from having a republic as the form of government of choice and South Africa definitely has the potential to be something great. If we were to continue with our discussion at this point, it would be a grave infringement on the intelligence of the readers. Surely, there must be problems associated with implementing a double-veto policy with the legislative government, but what are they and how would South Africa be able to withstand them? Even with all of the benefits of establishing this system within the confines of the government, South Africa would still face two possible negative outcomes from attempting the double-veto policy. One of these outcomes involves the chance of extreme proactive attempts to gain a majority power over the other party. This would occur when one faction would feel as if the other were taking advantage of the new system to gain additional power, which would most likely lead to complete dissolution of both groups working together to achieve a more effective democracy and hinder any future attempts of reconciliation between the two factions. ...read more.

The one reason why South Africa is different than many other countries is because both political factions want to talk to one another in order to find a way to coexist in a nonviolent way. Evidence of these attempts are most effectively given through the work of the Truth and Reconciliation Commission (TRC) regarding post-apartheid peace attempts. Within this organization, both native Africans and Afrikaners/English inhabitants of South Africa are able to come together to talk about the atrocities of apartheid in an attempt to forgive but to never forget. The Chairperson of the Commission, Archbishop Desmond Tutu, led a report covering the main objectives of the TRC and commended the entire South African people for their strength through the process of coming forth to tell their stories and thanked them for allowing South Africa to become a benchmark for the world in all communities wanting to make a nonviolent transition in society (TRC Report 1). Both parties working together on this project confirms what an extraordinary country South Africa is and that they are fully capable of handling something as intense and demanding as establishing and upholding a system of double-veto policy. South Africa has endured many horrendous events in the past, which is why they are strong enough to move past doubt and uncertainty to establish a system of double-veto jurisdiction within their government. The time to act is now. The world can no longer ignore the political faction problems within South Africa. Even though a creative system will have to be devised which differs from the case of the United States, such virtues that the Founders laid within our Constitution can still apply to South Africa. With the help of such publications as the Federalist Papers, South Africa may one day be able to find a new founding, a better founding; something that this country has been in desperate need of since their independence less than two decades ago. ...read more.