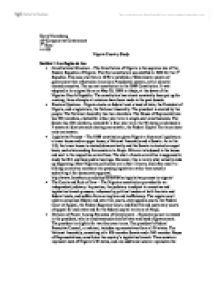 Kerry Nierenberg AP Comparative Government 7th Hour 4-4-09 Nigeria Country Study Section I: Les Regles de Jeu * Constitutional Structure - The Constitution of Nigeria is the supreme law of the Federal Republic of Nigeria. The first constitution was drafted in 1960 for the 1st Republic. This was rewritten in 1979 to establish a Westminster system of government that reflected an American Presidential system, with a directly elected executive. The current constitution is the 1999 Constitution. It was adopted in its original form on May 29, 1999 in Abuja, at the dawn of the Nigerian Fourth Republic. The constitution has almost constantly been put up for revising; three attempts at revisions have been made in the past decade. * Electoral Systems - Nigeria elects on federal level a head of state, the President of Nigeria, and a legislature, the National Assembly. The president is elected by the people. The National Assembly has two chambers. The House of Representatives has 360 members, elected for a four year term in single-seat constituencies. The Senate has 109 members, elected for a four year term: the 36 states are divided in 3 senatorial districts each electing one senator; the Federal Capital Territory elects only one senator. * Legislative Process - The 1999 constitution gives Nigeria a bicameral legislature: a lower house and an upper house, a National Assembly and a Senate. As in the U.S, the lower house is elected democratically and the Senate is elected on equal basis, each state sending five senators to Abuja. Bills are introduced in the house and sent to the respective committees. The chair of each committee is supposed to study the Bill and have public hearings. However, this is rarely what actually ends up happening. Most Nigerian politicians are in fact illiterate, and often resort to bribing committee members into passing legislation rather than actually submitting it for democratic approval. ...read more.

* People's Progressive Party (PPP) * People's Redemption Party (PRP) * People's Salvation Party (PSP) * Progressive Peoples Alliance (PPA) * United Nigeria People's Party (UNPP) * United Nigeria People's Party (UNPP) * Political Culture - Nigeria's robust civic and religious groups, driven underground by military rule, have blossomed into watchdogs, freely criticizing and even condemning the government's handling of elections. Since the beginning of the nation's existence, Nigerian political movements, media outlets, and trade unions whose purpose was the advancement of all Nigerians, not specific ethnic groups, became commonplace. Ethnicity plays a very large part in politics in Nigeria, seeing as political officials are allocated depending on what ethnic group they belong to. * Foreign Policy Concerns and Global Pressures - First, the ethnic and religious mix of the country required cautious positions on some issues, such as policy toward Israel. Nigeria found it difficult to restore diplomatic ties with Israel and had not done so as of 1990 because of Muslim opposition and sympathy with the rest of the Arab Muslim world. Second, Nigeria's legacy as an ex-British colony, combined with its energy-producing role in the global economy, predisposed Nigeria to be pro-Western on most issues despite the desire to maintain a nonaligned status to avoid neocolonialism. Third, the country's membership in and commitment to several international organizations, such as the United Nations and bodies mentioned earlier, also affected foreign policy positions. Fourth, and most important, as the most populous country in Africa and the entire black world, Nigeria perceived itself as the "giant" of Africa and the potential leader of the black race. Thus, Nigerian external relations have emphasized African issues, which have become the avowed cornerstone of foreign policy. Section IV: Key Terms * Names of Leaders * Chief of State: President Umaru Musa Yar'adua (since 29 May 2007); the president is both the chief of state and head of government. ...read more.

However, these parties did not have much say in government elections and suffered many setbacks. Since the elections in the late 1990s, the three registered parties have suffered from leadership squabbles. It is unlikely that the parties will remain stable for very much longer. Section VII: Media Review Article 1 - "After Rocky Election, Nigerians Warm to New Leader" This article describes the feelings of many Nigerians leading up to the installation of the most recent president. This election saw the first transfer of power from one civilian to another in the country's history. Immediately after the new president was announced, many citizens of Nigeria were infuriated. They did not agree with the policies of the new president and believed that the elections were rigged by the almost always corrupt government. Five months after a contentious election that international observers said was deeply flawed and in some places so badly rigged that the results were not credible, the fires that flared during election violence have finally cooled. One of these reasons is most likely because Mr. Yar'Adua is the first president in a generation to have no military ties, and this decreases some of the imminent political corruption that will come during his time in office. Article 2 - "Report Traces Twisting Routes to Power in Nigeria" This article discusses events after Nigeria, Africa's most populous nation, became a democracy in 1999, after long, brutal military rule. The transition had been long and rocky, with two deeply marred elections and little meaningful development from the billions of dollars flowing from the country's vast oil reserves. The previous April election was so seriously affected by rigging, violence and incompetence that international observers said its results were not credible. Nigeria's new president, Umaru Yar'Adua, admitted there were lapses in the election and pledged to reform the electoral system to stamp out abuses. This is a big change for a government official of Nigeria, as most of them choose to make things easier on themselves and leave the corruption and bribery in its place. ...read more.