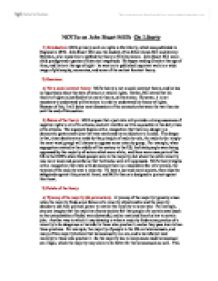 NOTEs on John Stuart Mill's On Liberty 1) Introduction: Mill's primary work on rights is On Liberty, which was published in England in 1859. John Stuart Mill was the student of his father James Mill and Jeremy Bentham, who raised him to defend the theory of Utilitarianism. John Stuart Mill was a child prodigy and a genius of historical magnitude. He began reading Greek at the age of three, and Latin at the age of eight - he went on to published important work in a wide range of philosophy, economics, and some of the earliest feminist theory. 2) Overview: a) Not a social contract theory: Mill's theory is not a social contract theory, and he has no hypothesis about the state of nature or natural rights. Rather, Mill states that his theory of rights is justified by his moral theory, utilitarianism. However, it is not necessary to understand utilitarianism in order to understand his theory of rights. Because of this, I will delay most discussion of the connection between the two theories until the end of this section. b) Basics of the theory: Mill's argues that a just state will provide a strong assurance of negative rights to all of its citizens, and will interfere as little as possible in the daily lives of its citizens. The argument begins with a recognition that there is a danger in a democratic government (one that was mentioned as an objection to Locke). The danger is that, since decisions are made by the principle of majority rule, the majority (or simply the most vocal group) will choose to oppress some minority group. For example, when segregation existed in the middle of this century in the US, the black people were being oppressed by the majority of voters which were white; and there were even parts of the US in the 1950's where black people were in the majority, but where the white minority was more vocal and powerful so that the blacks were still oppressed. ...read more.

Against paternalism a) The Basic Argument: It is now time to deal with the question of why a government should not be paternalistic. Mill argues that such legislation has the strong potential to be damaging to the society by stifling individuality and prohibiting people from having control over their own lives. Paternalistic laws will also tend to inhibit the evolution of society and social customs by mandating that people follow the currently established norms. It is certainly the case that paternalistic legislation inhibits individuality. Mill argued that individuality is of crucial importance to the health of a democratic society because without it there develops stagnation and complacency, which discourage people from becoming educated and politically involved. Paternalism also prevents the emergence of the truth concerning both scientific and social questions. A government might choose to compel all of its citizens to go to church on Sunday (or even to practice a particular religion) because they believe that it is better for those people if they do so, but such a policy is oppressive as well as deterring individuality. Such a law would certainly have been possible in the past, but society has evolved to the point where we would no longer accept such a law. This is a progression in society. Maybe a better example would be the historical government restriction on scientific inquiry that went against a state endorsed religion, this clearly had detrimental effects on social and scientific development. A contemporary example would be our laws against homosexual relationships and restrictions on homosexual marriages. Such laws are clearly paternalistic, and they inhibit the development of alternative ways of living which may turn out to be beneficial to the individuals and thus to the society. Suggested laws against smoking in private (where others aren't harmed) are another modern example of paternalistic laws. b) Refinements for more difficult cases: These arguments may seem to have little to do with something like seat belt laws, and you might ask what is wrong with those kinds of laws. ...read more.

a) Effective against Social Contract: Social contract theories seem to be unable to avoid a tyranny of the majority (Rousseau also fails in this because he cannot make clear what the general will is or how to discover it). For Mill there are no natural rights, a right is societal and is embodied in a law - for social contract theorists natural rights are essential, but they are peculiar sorts of entities that are not ever embodied or clearly seen. Claiming to have a natural right is sort of like claiming to have an invisible friend that cannot be detected in any way, not even you have ever seen her; it sounds kind of dubious to base a theory on something we have no evidence about. b) Supported by the Bill of Rights: It is also worth mentioning that the Bill of Rights was put in place in large part because of the same considerations that motivate Mill's theory. The Bill of Rights is supposed to prevent government from infringing on the rights of minorities, and to provide absolute boundaries beyond which government is not allowed to legislate. These boundaries are designed to prevent the tyranny of the majority, and to allow for freedom of expression and open debate. c) Arguing against Mill: Mill can be criticized because he does not allow for what seem to be very reasonable and helpful paternalistic laws. For example, thousands of lives have been saved by seat belt laws, and no one has seemingly been harmed. Any theory that would prevent this must be seriously flawed. Mill can also be criticized on the grounds that it is not possible to determine what actually constitutes harm. Consider some of the hard cases that I mentioned above to bring this out, and think up some more of your own. It may be that the harm principle sounds good, but that it cannot be practically applied because it is far too vague concerning what exactly counts as harm. ...read more.