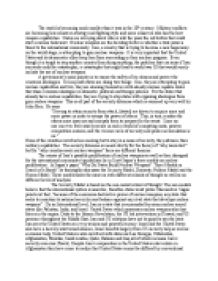 ﻿The world is becoming much smaller than it was in the 20th century. Military conflicts are becoming less reliant on strategy and fighting style and more reliant on who has the best weapon capabilities. States are worrying about who is will the press the red button that could start a nuclear holocaust. Nuclear weapons are the deciding factor in whether a state poses a threat to the international community. Iran, a country that is trying to become a new hegemony on the world stage, is attempting to gain nuclear weapons. It is very important that the United States and its democratic allies keep Iran from succeeding in their nuclear program. Even though it is tough to stop another country from doing anything, the problem that can arise if Iran succeeds could be catastrophic, a catastrophe that might lead to world war III that would surely include the use of nuclear weapons. A government?s main priority is to ensure the safety of its citizens and protect the countries ideologies. To keep safe states are doing two things. One, they are attempting to gain nuclear capabilities and two; they are aliening themselves with already nuclear capable states that share common ideologies in domestic, political and foreign policies. For the states that already have nuclear capabilities, they are trying to stop states with opposing ideologies from gain nuclear weapons. This is all part of the security dilemma which is summed up very well by John Herz. ...read more.

His use his offensive (Anti-Western and Anti-Israel) speeches to unify Iran?s population and gather support are well known in the international community. ?By controlling public opinion, the strategic elite is able to create a positive public disposition towards nuclear weapons by building up threat perceptions, and more significantly attaching symbolic values to nuclear devices: national pride??(Frey 14). An important thing to note in this argument is that Iran has yet to announce that they are in fact producing Nuclear weapons but they do have a nuclear program that they claim is for energy purposes only. The Iranian Nuclear program has become a gem for the Iranian population. The people are proud and become infuriated when the international community pushes to end it. This nuclear program represents their sovereignty and they do not want it infringed upon. Domestically Ahmadinejad stresses the external security challenges posed by the US and Israel to gather support from hardliner conservatives in the political system. The system that Israel has set up provides an interesting set up for the domestic model. The way Ahmadinejad had set up the nuclear program for energy has public opinion very high but if he was to come out and tell his country that they are creating weapons as well it could spark outrage but it could also be parallel to the opinion on the energy program. Citizens could be proud and feel as their country is now competing with the west and other great nations. ...read more.

It is unclear if Egypt, Turkey, or Saudi Arabia would seek to match Iran?s growing nuclear program but s regional arms race is probable. The United States response is even harder to predict but its response will surely consist of deterrence but also might choose military action to halt Iran?s nuclear program. No matter what the outcome, it is clear that the region is not stable while Iran continues its nuclear programs. The complicated mixture of countries involved and their different perspectives will also create a domino effect that could escalate to the use of nuclear weapons. In the upcoming years it will be harder to control the situation and limit the chance of a military conflict. While the situation is still under control, there are still possible options for dealing with Iranian proliferation. There is a wide range of ways that outside states can react to Iran?s options, some of which are already in play: diplomacy and dialog, sanctions, regime change, preventive or preemptive strikes before Iran has a significant force, containment, deterrence, and defense. Diplomacy and dialog, which is in place now, is being used to convince Iran that they do not face any real threat that would call for the need to proliferate. This tactics is an attempt to stop the vicious circle cause by the security dilemma. Sanctions are typing to put economic pressure on Iran by the use of controls and measures that limit Iran?s access to technology and limit its access to arms. In the hope of crippling Iran economically, the sanctions will hopefully force Iran to stop its proliferation. ...read more.