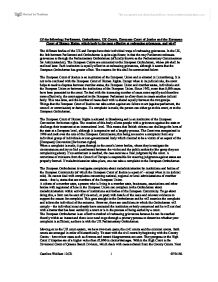 Moving on to the UK court system, we have two main parts; the civil courts and the criminal courts. Both courts are arranged in order of hierarchically. To start with the civil courts by beginning with the County Courts - here minor cases such as divorces and tenant disagreements are seen. They progress to the High Court if disputes are of a higher value than �5,000 in claims/damages. Within the High Court is the Divisional Court of Queens Bench Division, which deals with cases referred from the County Courts. Next is the Family Division, which deals with the family and legal side of personal relations. The third part of the High Court is the Chancery Division, which deals with taxation and wills. Any appeals go to the House of Lords - the highest court in the Civil Courts. The process of dealing with a compliant through the Civil Courts is long and expensive. It takes a long period of time to process all complaints, and then to determine whether they are in need of a hearing. The outcome is not always what the victim expects, so their time and money feels wasted. However, the Civil Courts are probably the best place to go to if you have been a victim of any of the aforementioned criteria. ...read more.

However, as the case study shows, when the public do have knowledge of the system, it can become very useful. The advice is free and confidential and all investigations are private. He can cover a wide range of public bodies and in many cases his recommendations are implemented so everyone gets something from it. Whereas this system would appear to be highly effective, statistics show that less than a quarter of the complaints made to the Ombudsman turn into investigations. From studying the different ways in which various bodies in the UK and Europe redress grievances, there seems to be no particular body that stands out as being the most effective, but merely one that has more effect than others. Where the European Courts independently have different courts that deal with complaints, and the UK has the Parliamentary Ombudsman and the two Courts which deal with complaints towards both governmental and personal affairs, the most effective in the way it deals with people is the European Ombudsman. He can be reached directly and without the fuss of have to go through an MP. This is not saying that the other systems do not have their merits, or that the European Ombudsman doesn't have his drawbacks, but that as a "user-friendly" system and the speed at which his replies are sent seem to prove that he is the man. ...read more.