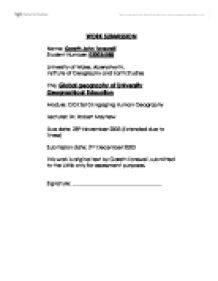 On the basis of the International Geographical Union website (www.igu-net.org), write a critical assessment of the global geography of university geographical education.

WORK SUBMISSION Name: Gareth John Tanswell Student Number: 030036088 University of Wales, Aberystwyth. Institute of Geography and Earth Studies Title: Global geography of University Geographical Education Module: GG12610 Engaging Human Geography Lecturer: Dr. Robert Mayhew Due date: 28th November 2003 (Extended due to illness) Submission date: 2nd December 2003 This work is original text by Gareth Tanswell, submitted to the UWA only for assessment purposes. Signature: ____________________________________ On the basis of the International Geographical Union website (www.igu-net.org), write a critical assessment of the global geography of university geographical education. This website doesn't discuss the origin of the discipline of Geography, but merely the bare flesh of the International Geographical Union. A summarised history of the Union is found in what can only be described as a list of past presidents and secretary-generals of the Union. I believe the website may have been established to be a portal for geographers, as a lot of work has obviously gone into the links page which details a wide range of geographical internet sites; and also the geography department's page, which presents a simple list of the geographical departments which exist in each country. ...read more.

It is quite interesting to note that 90% of the executive committee is made up of representatives from northern hemisphere representative organisations, and only South Africa is represented in the executive as a southern hemisphere country. On a closer analysis, only 10 southern hemisphere countries exist with Geographical departments, does this make Geographical education and analysis a primarily northern phenomenon? Links can be made with the Brandt report which reported the north-south economic divide between countries, that the better economically developed countries were in the north, and the least in the south, with Australia being the exception where the line drops to include Australia as a northern country. Does that mean that the world of geographical academia primarily exists were money is readily available? Hundreds of thousands of pounds of grants are awarded to the UWA's Institute of Geography and Earth studies to undertake various research projects. It is the findings of that kind of research that creates the basis of Geographic academia, and is spread between states, and academic institutions globally through the distribution of reports and journals. ...read more.

A problem is seen in the website in that it shows no Geography departments for Mexico, yet Professor Jos� Luis Palacio-Prieto, one of the IGU's Vice-Presidents works for the Institute of Geography in the National University of Mexico. Further inspection of the website under the National Committees sections shows that a Mexican geographical organisation exists, Sociedad Mexicana de Geografi y Estad�stica, although I am not too sure how happy the executives from that organisation would be if they were to properly look at the website of their umbrella organisation. In conclusion, I found the IGU website to be of great reference for discovering more about the Union, and the many university departments which exist globally. It provided a core source for a simple list of geography departments in each country, making a global analysis painstaking. However, as detailed, there are some inconsistencies in the data. The data showed that money is the key basis of the location and distribution of geography departments, but that the Executive Committee of the Union is mis-represented according to where the great geographical 'powers' that exist in today's competing world of academia can be found. ...read more.