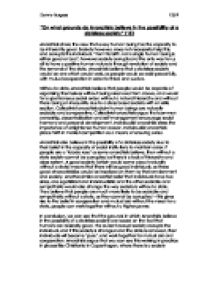 Anarchists share the view that every human being has the capacity to be inherently good. Society however, does not necessarily help this, and corrupts the individual, ‘from his birth, not a single human being is either good or bad’, however society corrupts and the only way for us all to have a positive human nature is through revolution of society and the removal of the state. Anarchists believe that a stateless society would be one which would work, as people would co-exist peacefully, with mutual cooperation in order to thrive and survive.

Without a state, Anarchists believe that people would be capable of organising themselves without being ruled over from above, and would for a spontaneous social order, without a natural hierarchy and without there being an inequality due to a class based society with an elite section. Collectivist anarchists claim human beings are naturally sociable and co-operative. Collectivist anarchists argue that common ownership, decentralisation and self-management encourage social harmony and personal development. Individualist anarchists stress the importance of enlightened human reason. Individualist anarchists place faith in market competition as a means of ensuring order.

Anarchists also believe in the possibility of a stateless society due to their belief in the capacity of social institutions to maintain order. If people are a ‘tabula rasa’ as some anarchists believe, then without a state society cannot be corrupted as there is a lack of hierarchy and class system. A good society (which would come about naturally without a state) means that there will be good individuals, as these good characteristics would be inscribed on them by their environment and society. Another similar anarchist belief that individuals have two sides, one egotistical and individualistic and the other sociable and sympathetic would also change the way society is without a state. They believe that people are much more likely to be sociable and sympathetic without a state, as they cannot be corrupted – this gives rise to the belief in cooperation and mutual aid without the need for a state, people can work together without a higher power.

In conclusion, we can see that the grounds in which Anarchists believe in the possibility of a stateless society are based on the fact that humans are basically good. The current corrupt society corrupts the individual, and if this society is changed and the state is removed, then individuals will become ‘pure’, and work together for mutual aid and cooperation. Anarchists argue that you can see this working in practice in places like Christiania in Copenhagen, where there is a society without the influence of the state, and people work together without corruption.