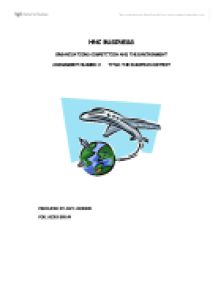 Organisations compatition and the environment - The European Context.

HNC BUSINESS ORGANISATIONS COMPETITION AND THE ENVIRONMENT ASSIGNMENT NUMBER: 2. TITLE: THE EUROPEAN CONTEXT PRODUCED BY AMY JACKSON FOR JACKIE SHAW 1.CONTENTS PAGE 1. CONTENTS PAGE 2. INTRODUCTION 3. SECTION 1 - INVESTIGATING THE KEY FEATURES OF THE LOCAL AND NATIONAL ECONOMY IN WHICH ORGANISATIONS OPERATE 3.1 THE ROLE OF THE STATE IN BUSINESS ORGANISATIONS, AND THE IMPLICATIONS FOR BUSINESSES OF THE MEASURES TAKEN BY GOVERNMENT TO CONTROL THE ECONOMY. 3.2 HOW HAS THE DECISION TO ALLOW EXPANSION OF MANCHESTER AIRPORT IMPACTED ON THE LOCAL ECONOMY AND THE IMPLICATIONS FOR TD TRAVEL GROUP? = 4. SECTION 2 - EXPLORING THE SIGNIFICANCE OF THE EUROPEAN DIMENSION FOR UK BASED ORGANISATIONS 4.1 THE TYPES OF EUROPEAN UNION POLICY DECISIONS WHICH HAVE IMPACTED ON BUSINESSES IN MEMBER STATES, AND HOW BUSINESSES HAVE BEEN AFFECTED. 4.2 ARGUMENTS FOR AND AGAINST THE UK JOINING THE EUROPEAN MONETARY UNION AND THE IMPLICATIONS FOR TD TRAVEL GROUP. 4.3 THE EFFECTS ON UK BUSINESSES IF THE EUROPEAN UNION WERE TO EXPAND. 5. CONCLUSION 6. BIBLIOGRAPHY 7. APPENDIX 2. INTRODUCTION The following report is designed to outline the impact of the UK government and the European Union on the operation of businesses in the UK. The report will concentrate on TD Travel Group as a UK business. TD Travel Group is an independent corporate travel organisation that takes the frustration and confusion out of business and group travel arrangements using its specialised services. It is based just 1 mile away from Manchester Airport. The report will be split into two main parts: Section 1 - Investigating the key features of the local and national economy in which organisations operate: This section will look at the main features of an economic system, analysing differing views of the state and their implications. It will also look at how different types of government policy such as interest rates and tax impact on TD Travel Group. ...read more.

Japan is 11.7% the size of the EU. The total population is 370,452,000 this is over 40% more than in the USA and 3 times as much as Japan. The member states are; Austria, Belgium, Denmark, Finland, France, Germany, Greece, Ireland, Italy, Luxembourg, the Netherlands, Portugal, Spain, Sweden and the UK. Other states hoping to join are Hungary, Poland, and the Czech Republic. The European Commission is the executive of the EU. The main tasks of the commission are: * To ensure that community rules and the principals of the common market are observed * To make policy proposals to the council of ministers * To enforce the implementation of legislation * To administer community expenditure. The UK has certain obligations arising out of its membership of the EU. European law is now as important as our own domestic law. We are obliged to obey European law in the same way, as we have to comply with UK law. It is important to understand the basis of the UK's membership of the EU because EU legislation is of great importance to all business decisions and operations. This is because the EU is essentially economic in nature. The objective of a single European market will require harmonisation of laws relating to business and trade. There has been a steady increase in the importance of the European Union Directives, which are incorporated into British Law, arising from the UK's membership of the EU. This process has continued as a consequence of the decision to implement the single European Market at the end of 1992. The fifteen member states of the EU now form one economic region in which goods, services, people and capital may move freely. The necessary legislation was introduced as a result of the passing of the Single European Act in 1986. All the European Union Countries flags 4.1 The types of European Union policy decisions which have impacted on businesses in member states, and how businesses have been affected. ...read more.

As a result of mutual solidarity and fair distribution of the benefits of economic development, moreover, the standard of living in the Union's weaker regions has increased enormously and they have made good much of the disadvantage they were at. Advantages of EU expansion to UK businesses include: * Easy access to an even larger market. * No barriers to trade - easier export regulations therefore less paperwork. * More freedom of movement for people and capital - with no barriers you can live, work and move money anywhere in the EU with no restrictions. * Economies of scale - more cost effective as larger market and smaller cost. * Access to a wider range of supplies. Disadvantages of EU expansion to UK businesses: * More competition. * Costs of membership - annual subscription, are the benefits going to outweigh the costs? * Loss of flexibility - having to follow European rules and be good Europeans * Grants Available - from the EU mainly for economically deprived areas such as Stoke or Liverpool for regeneration. If weaker countries join they are more likely to get grants. 5. CONCLUSION The first part of this report has investigated the key features of the local and national economy in which organisations operate. To do this it has looked at the role of the state in business organisations and the implications for businesses of the measures taken by government to control the economy. It has also discussed the advantages and disadvantages of the expansion of Manchester Airport, and how this has impacted on local economy and businesses. The second part of the report was exploring the significance of the European dimension for UK-based organisations. This has been done by discussing policy decisions of the EU and how they have impacted on businesses in member states. It has also looked at the European monetary union giving the arguments for and against the UK joining and the implication for UK businesses. The report has also discussed the enlargement of the EU considering the effects on businesses in the UK. 6. ...read more.