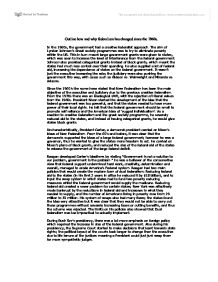 Outline how and why federalism has changed since the 1960s.

Page 1 of 2 Outline how and why federalism has changed since the 1960s. In the 1960s, the government had a creative federalist approach. The aim of Lynden Johnson's Great society programmes was to try to eliminate poverty within the US. This in turn meant large government grants were given to states, which was seen to increase the level of interference from the federal government. Johnson also provided categorical grants instead of block grants, which meant the states had much less control over their spending. He also supplied a lot of federal aid, increasing the dependence of states on the federal government. It wasn't just the executive increasing the role; the judiciary were also pushing the government this way, with cases such as Gideon vs. Wainwright and Miranda vs. Arizona. Since the 1960's the some have stated that New Federalism has been the main objective of the executive and judiciary due to the previous creative federalism. From the 1970s there was an ideological shift, with the rejection of liberal values from the 1960s. President Nixon started the development of the idea that the federal government was too powerful, and that the states needed to have more power of their local rights. ...read more.

The limits on his policies also showed that Dual federalism was too impractical to actually implement. During Bush Snr's presidency, there was a lot more emphasis on foreign policy which required the increase in size of the federal government. Also during his presidency, the Supreme Court started to make decisions that leant towards state rights; the political layout of the courts took longer to change than the executive due to life tenure of the justices meaning a President could just just swap them for more sympathetic judges. The atmosphere mainly created by Reagan of dual federalism was accelerated through Clinton's presidency. Like President Carter and Bush Snr, Clinton was previously a governor, and believed that governors should have freedom to decide what was in the best interests of their states. Many Supreme Court decisions made in these years also started to give more rights to the states. For example in New York vs. Unites states, the court ruled that the federal government could not instruct a state what to do with radioactive material. Also in Pritz vs. United States, the court ruled that Congress could not instruct states to carry out background checks on people buying handguns, as it was a matter for the states to decide rather than for the federal government. ...read more.

He may arguably further the concept of government intervention with policies similar to affirmative action, since he is a very left wing democrat, and also is being accused of being socialistic by some Americans in his approaches. The controversial issue of Medicare has also been another example of huge federal spending. In conclusion, the United States seems to vary in its size of federal government. For many Americans the ideal solution may never be reached, as it was to close to the ideas of the articles of confederation and was proven to have not worked. In the view of these stated rights idealists, Washington DC's government has far too much power, and that their constitutional safe guards against the concentration of power in central government are inadequate. Furthermore, the evidence suggests that even committed states rights activists such as Ronald Reagan, can only slow down the process of centralisation of power in the modern era, rather than reverse it. However from the opposite view point the centralisation hasn't gone far enough, with the argument that there is too much disparity between the rights given in each state. The debate of the US federal system is an ongoing debate, and many compromises will have to be met, as there is no clear answer with a large variety of political viewpoints across the United States of America. ...read more.

Overall this is a very good essay. Although the essay is chronological, which is often not the best way to answer questions, here, the way the question is worded, leads towards an answer of this nature. To improve, more is needed at the start about what federalism actually is and why it is controversial. More theories as to why federalism has changed could also be included.