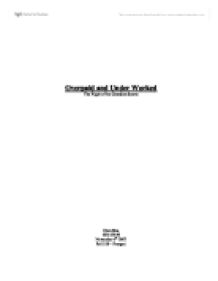 Overpaid and Underworked: Plight of the Canadian Senate

Overpaid and Under Worked The Plight of the Canadian Senate Chen Shu 100115919 November 6th 2007 Pol1119 - Prosperi When an architect designs a structure, one of the important questions that are posed before all others is "How useful is the structure?" An effective design is one that efficient and which every design and every structure carries with it, as sense of purpose. The founding fathers of Canada's political structure mimicked the parliamentary system with that specific purpose in mind, but what was written on the constitution and what is practiced today are complete polar opposites. The current day Canadian Senate operates with a minimal amount of practical power and serves as symbolic rubber stamp to all the policies that are initialized by the Cabinet and the House of Commons. In order to explore the need for Senate reform in Canada, it is relevant to compare it's utility with the neighboring Senate of United states on three interrelated dimensions: the powers they wield, the principles or statutes by which they are selected and the means they represent their constituencies. The comparison drawn between the two Senates should serve to note the need by Canadians who call for the Triple-E Senate reform. ...read more.

The citizens of each respective state are able select federal representatives, but at the same time, not having to completely overhaul the entire Senate. To have an elected Senate, in theory means the Senate members must be responsible to his/her constituency, or face the grime nature of replacement by the end of his/her tenure. This sense of responsibility for one's own state's well-being keeps the American Senators in check when proposing legislations for the represented state. With the presence of an appointed Senate, one does not have to answer to the people thus causing the Canadian Senate members to be free from the fear of removal. In fact, this aspect lack of responsibility that we see Senators in Canada as people at the end of their careers opting for a more eventful and time occupying retirement. Whereas than US Senators who in many instances have gone on to become Presidents.6 Equal The American Constitution penned through the hands of Thomas Jefferson among other founding fathers stated, "We hold these truth to be self-evident, all men are created equal..." This notion of equality was realized through the formation of the US bicameral system. ...read more.

While it is ideal and noble to dream about a Senate that is equal, elected and effective. Does Canada really need such a radical change? People have often say, "if it ain't broke, don't fix it." Yes, the Canadian Senate may seem like the remnants of an antiquated past of our birth of federalism, but has it caused Canadians any drastic problems? It could be concluded that the Senate for most part of steered clear of the scrutiny of Canadian mass media, only coming under criticism for isolated cases. I'm sure as the years progress, the call for Senate reform will come up again and again, but until the majority party in the House of Commons were threatened by retaliation from the Senate, or unless another Senate takes a long extend sabbatical9, this call will ceased to be answered. And while it is glamorous to speak of Senate reforms, and cleaning up the dusty upper house, people would argue there are more important issues that concern Canadians. The threat of a partisan Senate collecting monthly salary for doing a minimal amount of work will always be there. It will take more than brokers of votes selling Senate reform every upcoming election to garner the steady footing Senate reform needs to succeed. ...read more.