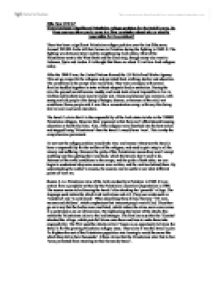 There has been a significant Palestinian refugee problem over the last fifty years. Around 700 000 Arabs left their homes in Palestine during the fighting in 1948-9. The fighting was between Israel and the neighbouring Arab states. Most of the Palestinians went to the West Bank and the Gaza strip, though many also went to Lebanon, Syria and Jordan. It is thought that there are about 2.5 million Arab refugees today. After the 1948-9 war, the United Nations formed the UN Relief and Works Agency. This set up camps for the refugees and provided food, clothing, shelter and education. The conditions in the camps were really bad. They were cramped, with several families huddled together in tents without adequate food or sanitation. During the rain, the ground would become muddy, and made tents almost impossible to live in. Clothes and blankets were nearly always wet. Illness and disease was common, with young and old people alike dying of hunger, disease, or because of the cold, wet conditions. Some people said it was like a concentration camp, with very few being able to leave and work elsewhere. The Israeli's claim that it is the responsibility of the Arab states to take in the 700000 Palestinian refugees. However their argument is that they can't afford decent housing, education or health facilities. Also, if the refugees were absorbed into the host nation and stopped being 'Palestinians' then the Israeli's would have 'won'. This is why the camps became permanent. To sort out the refugee problem would take time and money. Many say the Israelis have a responsibility for the welfare of the refugees, and need to put a stop to all the misery and suffering. However the pride of the Palestinians means they won't accept anything less than getting their land back, which the Israelis don't want to do. Because of the awful conditions in the camps, and the pride of both sides, we can begin to understand why some sources were written, and the motives behind them. ...read more.

However it isn't useful because it is one sided and we don't know if we can trust what it says. It doesn't help us decide who is to blame for the refugee problem because it is only what one person is saying and we don't know if it can be trusted. Source D is an extract from comments made by Palestinian refugees on the work of the UN. It says that they refused houses and compensation from the UN to help them settle in their home countries, because they want 'nothing short of a return to our homeland'. It shows how much pride the Palestinian refugees have, as they want nothing less than getting the land back, which they believe, is rightfully theirs. It is different to the other sources because it is written by refugees, not by outsiders. This could make it more reliable, as they are actually there, however it could also make it unreliable because they are saying what they are for a reason: they want their land back. It is useful because it gives us a reason why the problem still continues - because the Palestinians are stubborn, and won't accept anything but their land back. It is not useful, because it only shows one side, and doesn't give a balanced argument. It also doesn't say anything about how the problem started. Source E is an Israeli view, made by the Israeli ambassador to the UN. It claims the Arabs have let the refugee problem continue for 'political motives'. It says there is plenty of room for the refugees in the 'vast Arab world'. It is blaming the other Arab countries. It says there is enough room for 'a million refugees'. This makes the Arabs look bad, as it looks like they are deceiving people into thinking the refugees have nowhere to go, when actually they have. This makes the Israelis claim to the land stronger as the Palestinians look bad. ...read more.

Arab sources suggest that the Palestinians were forced out of their homes by Israeli's, and that the state of Israel was founded on a war crime and is therefore illegal. They describe 'cold blooded' attacks by Israeli's and the 'massacre' of innocent people. They say that there was 'not a single order, or appeal, or suggestion about the evacuation from Palestine from an Arab radio station inside or outside Palestine in 1948'. This discredits the Israeli claim that the Palestinians were told to leave by their own leaders. Palestinian sources also claim that after the Palestinians were 'forced out' of their homes, they were then 'refused entry back in' by the Israeli's. In the Arab sources, Palestinians are seen as victims, having their lives controlled by Israeli soldiers, and have to resort to 'desperate acts of terror' to have their voices heard. Israeli sources suggest that the Arab leaders told the Palestinians to leave their homes, and that Palestine and Israel are rightfully theirs. They claim that the Jews are under constant threat from uprising Palestinian refugees, who are targeting innocent civilians and using violence to try and get their point across. One Israeli source claims that the refugee problem is being kept alive for political motives, to try and make the Israeli's look bad. It claims that there is 'enough room in the vast Arab world for a million refugees'. All of the sources cannot be completely reliable, because they all seem to have a motive. They don't give a balanced argument for both sides, and their basic aim is to make the other side look bad. It is hard to come to a firm conclusion about who is responsible for the refugee problem, and why it still continues today, because most of the sources contradict each other. There is not enough evidence for either side, to decide who is to blame overall. Ellie New 11WAP There has been a significant Palestinian refugee problem for the last 50 years. Do these sources allow you to come to a firm conclusion about who or what is responsible for the problem? ...read more.