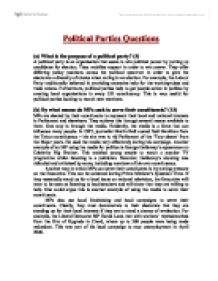 Political Parties Questions (a) What is the purpose of a political party? (5) A political party is an organisation that seeks to win political power by putting up candidates for election. They mobilise support in order to win power. They offer differing policy positions across the political spectrum in order to give the electorate a diversity of choice when voting in an election. For example, the Labour Party traditionally believed in providing extensive help for the working-class and trade unions. Furthermore, political parties help to get people active in politics by creating local organisations in every UK constituency. This is very useful for political parties looking to recruit new members. (b) By what means do MPs seek to serve their constituents? (15) MPs are elected by their constituents to represent their local and national interests in Parliament and elsewhere. They achieve this through several means available to them. One way is through the media. Evidently, the media is a force that can influence many people. In 1997, journalist Martin Bell ousted Neil Hamilton from the Tatton constituency - his aim was to rid Parliament of the 'Tory sleaze' from the Major years. ...read more.

They also support head teachers having more control over admitting and expelling unruly pupils, rather than local government having this power. However, the Conservatives have now dropped their opposition to the Government's introduction of university top-up fees. On the other hand, the Liberal Democrats are committed to scrapping top-up fees and replacing the deficit with more money from the State. They also differ from Labour and the Conservatives in the respect that they do not support more freedoms for schools. Liberal Democrat Education Secretary Sarah Teather stated, "The Government's education bill is a timid bill that threatens to entrench inequality. Schools need autonomy, not competition, and collaboration to provide all our children with a decent education." Similarly, immigration has been a dividing and controversial issue for all three main parties. ID cards will be introduced in the coming years by the Labour Government, who claim it will help to combat illegal immigration. Simultaneously, Blair has promised to allow more genuine asylum seekers refuge in Britain - although stopped short of supporting the Conservative manifesto pledge in 2005 to set an annual quota. The Conservative position now under David Cameron is not entirely clear - there is a policy review on the subject taking place now and Cameron has warned the Tory Party to use "more thoughtful language" when discussing a sensitive issue such as immigration. ...read more.

The Liberal Democrats would also like to see proportional representation introduced for general elections - they accuse Blair of lying about his promise of electoral reform. Indeed, Blair did change tact in 2001, when he branded proportional representation as "unfair" since it gave undue power to smaller parties. Furthermore, the Liberal Democrats support a 100% elected Upper House, which has been rejected by the other two parties. However, it seems that after the 'Cash for Honours' scandal was exposed, the other two main parties would like to see a 70% elected Upper House. In conclusion, all three parties offer different policy packages to some extent. The dividing lines between Labour and the Conservatives have become blurred due to the arrival of David Cameron as Tory leader. Many argue that the two parties share same broad ideological principles, but simply differ in precise details. This will be tested after the Conservative policy review committtees report back with their suggestions in 18 months. However, it is clear that the Liberal Democrats do offer votes a real alternative in policy, particularly regarding crime and constitutional reform. However, none of the main political parties advocate a return to socialism and all agree in a mixed economy with private enterprise. Thus, it is arguable that we are reaching a new stage of consensus politics in the UK. ...read more.