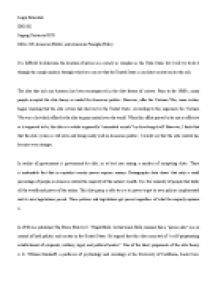 Power in America. The idea that the rich run America has been encompassed in the elite theory of society.

﻿Sergii Petroshuk ID01502 Sogang Universty GSIS GISA 220: American Politics and American Foreighn Policy It is difficult to determine the location of power in a society as complex as the Unite States but I will try to do it through the simple analysis through which we can see that the United States is an elitist society run by the rich. The idea that rich run America has been encompassed in the elite theory of society. Prior to the 1960's, many people accepted the elite theory as model for American politics. However, after the Vietnam War, some writers began claiming that the elite system had died out in the United States. According to this argument, the Vietnam War was a last-ditch effort by the elite to gain control over the world. When this effort proved to be not as effective as it supposed to be, the elite as a whole supposedly "committed suicide" by dissolving itself. However, I think that that the elite system is still alive and doing really well in American politics. I would say that the elite control has become even stronger. In reality all government is government by elite, or at best one among a number of competing elites. ...read more.

Supporters of pluralism can also claim that the two-party system prevents any one group from holding power in America. According to this perspective, American politics is a competition between two major ideologies: conservatism and liberalism. Conservatism is pluralistic in that it rejects simple majority rule and liberalism is pluralistic in that it rejects rule by a single elite. However, the existence of these two competing ideologies cannot guarantee people against the existence of elitism in American politics. Furthermore, conservatism and liberalism tend to divide politicians into polarized camps and in the effort to assert their own points of view, politicians often ignore the wishes and needs of the majority. It should be noted that "competition" between conservatives and liberals seems to be one-sided in most cases. In terms of political debate, "the weight of the evidence shows that the moderate conservatives and ultraconservatives within the power elite are the predominant influences on the ultimate outcomes of these conflicts" (Domhoff). This indicates that conservatism is the favored ideology of the power elite. It further indicates that the American political system is not pluralistic. Socialism is a political philosophy which agrees with some aspects of the elite theory. ...read more.

If a politician or corporate leader performs an unethical act, the national media is there to make an issue out of the matter. Because of this factor, the media is at least equal in power to the most powerful of the nation's wealthy. Many politicians and sociologists have argued that the elite system described by C. Wright Mills came to an end as a result of the Vietnam War. However u can see that?s not true. The power elite in America is not dead and, in fact, it shows signs of becoming stronger than ever before. As Domhoff has indicated in his book Who Rules America Now?, corporate influence over politicians continues to be as widespread at the present time as it was in the past. The elite class in America specifically shows its influence during such political processes as candidate selection, lobbying, and policy-making. Furthermore, as Domhoff has pointed out, positions of political power in America are often occupied by members of the elite themselves. Other researchers in the field of sociology have noted that there are signs that the power elite in America has actually grown in recent years. In particular, the traditional power elite as defined by Mills has now been expanded by the existence of new elites such as the national media. ...read more.