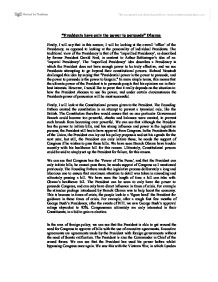 The Founding Fathers made the legislative process deliberately a long and laborious one to ensure that maximum attention to detail was taken in amending and ultimately passing a bill. We have seen the length of time a bill can take with Obama's healthcare bill. The President can be seen to only have the power to persuade Congress, and can only have direct influence in times of crisis. For example the stimulus package introduced by Barack Obama was to help boost the economy. This is because in times of crisis, the people look to a 'figure head' the President for guidance in these times of crisis. For example, after a rough first few months of George Bush's Presidency, after the events of 9/11, we saw George Bush's approval ratings skyrocket to 92%. Congressmen ultimately are only interested in their Constituents, in a bid to gain re election. In the area of foreign policy, we can see that the President is able to get around the need for Congress to approve of bills with the use of executive agreements. ...read more.

We can also look towards the future, and see how Obama might use his powers, and the power of persuasion. Obama could be said to be a President that relies on his power of persuasion. Obama is a President that relied heavily upon his charisma in his Presidential campaign. Despite Obama's undivided Government, his power is considerable restrained, if Obama wishes to succeed in passing his domestic policy proposals, he is going to need to rely on his power of persuasion. We can see that Barack Obama has been having trouble passing bills even with the undivided nature of the U.S Government. Therefore, Obama will need to rely on the power of persuasion to pass his proposals. In Conclusion, it is where the President ultimately decides where to focus his attention is the ultimate determinant of their success, and also their reliance on the power of persuasion. It is under certain circumstances, as I have mentioned throughout this answer, which allow the President to go beyond his Constitutional powers, and stretch his powers to accommodate the circumstance, we have seen this with the Presidents manipulation of executive agreements etc. This Is how I described earlier as an imperilled Presidency. ...read more.