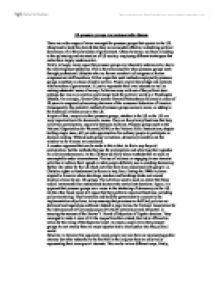 US pressure groups are undemocratic, discuss There are wide ranges of views amongst the pressure groups that operate in the US. Many tend to hold firm beliefs that they are somewhat effective in disabling political dominance of all three branches of government. Others however, see them as adding to the splintering and atomisation of US society, employing different techniques that make them largely undemocratic. Firstly, to begin, many argue that pressure groups are inherently undemocratic, due to the revolving door syndrome. This is the terms used for when pressure groups work through professional lobbyists who are former member's of congress or former congressional staff members. Critics argue that such methods employed by pressure groups constitute an abuse of public service. People exploit knowledge and contacts with branches of government, all just to represents their own interests as well as making substantial sums of money. Politicians may walk out of the political door perhaps due loss in an election and emerge back the political world as a Washington lobbyist. ...read more.

Such activities have been associated with group's i.e. Christian rights or fundamentalist forms in Iraq /Iran. During the 1990s violence erupted in America where shootings, murders and bombings broke out around abortion clinics by pro-life groups. The activities went to such an extent that these radical movements also assassinated doctors who carried out abortions. Again, it is apparent that pressure groups are a cause to the shattering of democracy in the US. On the other hand, many still argue that they perform important functions, including policy monitoring. They scrutinise and hold the government to account in the implementation of policies, to try ensuring that promises are fulfilled, policies are delivered and regulations enforced. Indeed in legal terms, the National Association for the Advancement of Coloured people (NAACP) certainly proved influential in securing the success of the Brown V. Board of Education of Topeka decision. They managed to make it clear of all the inequalities that existed, that led to affirmative action by the ruling of the Supreme Court. ...read more.

Groups such as those that represent various ethnic Americans are good examples. These can include the American Jewish Congress or the Organisation of Chinese Americans. Critics view such groups as splitting society by accentuating 'me' rather than 'we'. It's argued that they spend a considerable amount of time fighting for their own special interests, whilst not adhering to the interests of the wider society. In support of pressure groups, the final argument that is usually made regards the educational experiences they provide. Many suggest that they educate the public opinion, ensuring everyone is conscious of the dangers if the government does not deal issues of importance and the effects of decisions made by the governments too. For example, membership pressure groups such as think tanks have been particularly important in the US. They conduct research; publish reports, all to benefit the people at large. To reach a firm conclusion, it is clear that pressure groups are to a degree very undemocratic, namely because of the methods they undertake. Yet, it must be made clear that they do perform key roles that to many seem to strengthen democracy rather than weaken it. ?? ?? ?? ?? ...read more.