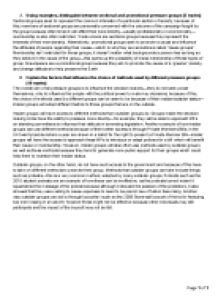 ﻿1. Using examples, distinguish between sectional and promotional pressure groups [5 marks] Sectional groups seek to represent the common interests of a particular section of society; because of this, members of sectional groups are personally concerned with the outcome of the campaign fought by the group because often times it will affect their lives directly?usually professionally or economically?membership is also often restricted. Trade unions are sectional groups because they represent the interests of their membership. Alternatively, promotional groups seek to promote a cause and influence the attitudes of people regarding their cause?which is why they are sometimes called ?cause groups?. Membership isn?t restricted for these groups, it doesn?t matter what backgrounds a person has as long as they believe in the cause of the group?this opens up the possibility of mass membership of these types of group. ...read more.

decisions; because of this, the choice of methods used by different groups can be seen to be because of their insider/outsider status?insider groups will adopt different tactics to those groups that are on the outside. Insider groups will have access to different methods than outsider groups do. Groups inside the decision making circle have the ability to pressure more directly?for example, they will be able to approach MPs on standing committees to influence their attitude in amending legislation. Another example of how insider groups can use different methods because of their better access is through Private Members Bills; in the UK twenty backbenchers a year are drawn in a ballot for the right to present a Private Member Bill?insider groups will have the access to approach these MPs to introduce or adapt policies for a bill which will benefit their cause or membership. ...read more.

Methods that outsider groups can take include things such as protests?this is a very common method, adopted by many outsider groups. Protests such as the 2010 student protests are an example of how these can be ineffective; as the protests turned violent it squandered the message of the protest because although it showed the passion of the protestors, it also showed that they were willing to cause expenses to need to be paid in lieu of tuition fees rising. Another way outsider groups can act is through boycotts?such as the 2008 Stonewall boycott of Heinz for featuring two men kissing in an advert; however these might not be effective because other individuals may still participate and the impact of the boycott may not be felt. Page of ...read more.