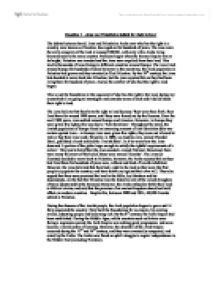 Question 1 - Jews and Palestinian beliefs for right to land

Question 1 - Jews and Palestinian beliefs for right to land. The debate between Israeli Jews and Palestinian Arabs over who has the right to a country, now known as Palestine, has raged on for hundreds of years. The Jews were the early occupiers of the land at around 1000BC, with only a few Arabs living harmoniously in the same country. Problems began when the Roman Empire was at its height, Palestine was invaded and the Jews were expelled from their land. This lead to thousands of Jews fleeing to different countries around Europe. The Jews lived around Europe for hundreds of years however in the meantime, the Arab population in Palestine had grown and they eventually filled Palestine. By the 19th century, the Jews had decided to move back into Palestine, but the Jews rejected this as they had been living there for hundred of years. And so the conflict of who had the right to land began. ...read more.

However, the Arabs refused to forfeit their land to Biblical claims, and said that the promise of an ancient kingdom should not hold effect on modern countries. Despite this, between 1880 and 1914, 60,000 Zionists settled in Palestine. During the absence of the Jewish people, the Arab population began to grow until it fully populated the country. They built the foundations for an empire, by creating armies, educating people and becoming rich. By the 8th century, the Arab Empire had been established. During the Middle Ages, whilst countries such as Britain were facing a regression period, the Arab Empire was making great progression, and soon became a world centre of learning. However, the downfall of the Arab Empire occurred during the 11th and 16th century, and they were eventually conquered, and ruled, by the Turks. The Arabs now faced an uphill struggle to regain independence in the Middle East (including Palestine). The turning point in this struggle began when Turkey fought on Germany's side in the First World War against Britain and her allies. ...read more.

This was because Britain believed that Jews that populated America and Russia could influence their government's actions, as Britain wanted support from both of those nations during the war. The declaration was written in a letter to Lord Rothschild, a leading British Jew, in late 1917, it was known as the 'Balfour Declaration' (as it was signed by British Foreign secretary, Lord Balfour), this declaration was seen by Jews as a promise from the British government to set up a Jewish state - in their eyes, giving them the right to Palestinian land. At the end of the war, both the Arabs and Jews believed they had a claim to the land. In 1947 Britain and France decided to pass on the responsibility of picking who should inhabit the land to the League of Nations (now known as the United Nations). They decided to split the land between the two nations, and give Britain rule of Palestine. Jewish immigration increased, and by 1939, 450 thousand Jews populated Palestine. Arabs were infuriated by this and fighting broke out, and thousands of lives were lost. ...read more.