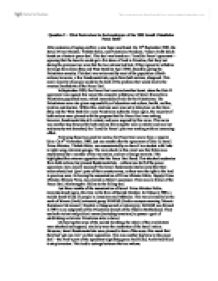 Question 2 - What factors lead to the breakdown of the 1993 Israeli-Palestinian Peace Deal?

Question 2 - What factors lead to the breakdown of the 1993 Israeli-Palestinian Peace Deal? After centuries of raging conflict, a new hope was found. On 13th September 1993, the Israeli Prime Minister, Yitzhak Rabin, and Palestinian President, Yasser Arafat shook hands on a historic peace deal. This deal was based on a 'Land for Peace' agreement - agreeing that the Israelis would get a fair share of land in Palestine, that they lost during the previous two wars that the two nations had had, if they agreed to withdraw its troops from Gaza Strip and West Bank by April 1994, therefore giving the Palestinian security. This deal was welcomed by most of the population of both nations, however, a few Fundamentalists, again from both nations, disagreed. This small minority of people would be the bulk of the problem that would lead to the eventual breakdown of the Peace Deal. In September 1995, the Peace Deal received another boost, when the Oslo II agreement was signed; this meant the complete withdrawal of Israeli forces from Palestinian populated areas, which increased self rule for the Palestinians. The Palestinians were also given responsibility of education and culture, health, welfare, taxation and tourism. Within this, elections were also set to take place on the Gaza Strip and the West Bank for a new Palestinian authority. ...read more.

Palestinian President Arafat therefore agreed to crack down on terrorist group HAMAS. The Arab nation was disgusted by this agreement, as the amount of land that was given to them was just a fraction of what was first agreed they are, however, pleased at the release of the Palestinian prisoners by the Jews. The Jewish nation was pleased at Arafat's promise to crack down on HAMAS, as that would stop most attacks, therefore making a more secure state. However they were not convinced over his influence he had over groups such as these. The 1993 Peace Deal had now failed, although attempts to salvage a new one had been made, it was nowhere near as good as the first - this caused a lot of conflict. This linked to the same argument that was usually presented - Arabs wanted to gain the land they lost, whilst the Jews wanted security. Soon after, Israel saw Ehud Barak elected as new Prime Minister, he was seen to be a tough character, but also willing to compromise. This news was given a positive reaction by people from both nations, as hope of a new deal emerged. The new outlook from the Prime Minister made the new compromise look even more realistic, and the harsh, stubborn days of Netanyahu seemed to be forgotten. ...read more.

On the 11th of November, 2004, the Palestinian President, Yasser Arafat, died aged 75. This was met by devastation from the Palestinians, who had lost their leader of many years, who had supported them through the Peace Deal and the breakdown of it. However, Israelis welcomed this news; Arafat was seen by these as a terrorist, who murdered thousands of their own race. This, again, signified the breakdown of the peace deal, now with none of the original negotiators alive, the deal seemed hopeless. The newly elected Palestinian President, Mahmoud Abbas, sent his security forces into the Gaza Strip, in the hope of curbing militant groups' attacks on Israeli targets. He hoped that, if successful, he could begin a revival of the Middle East Peace Process. This pleased moderate Palestinians and Israelis however, angered fundamentalists from both nations, as moves towards peace and compromising had been made. This inspired them to fight back and continue the conflict. This move, echoes previous conflict of opposition forces moving in onto the same territory, this could spark either peace or violence. To conclude, during my research I have discovered many factors that lead to the eventual breakdown of the 1993 Peace Deal. I believe that opposing opinions of the public lead to the demise of it. The assassination of Prime Minister Rabin echoes this. All of these events show how the people, and eventually governments and nations, refused to compromise their land in exchange for peace. ...read more.