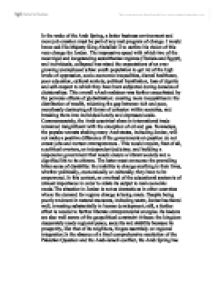 Question to the King of Jordan. In the wake of the Arab Spring, a better business environment and more job creation must be part of any real program of change. I would hence ask His Majesty King Abdullah II to outline his vision of this very change for Jo

In the wake of the Arab Spring, a better business environment and more job creation must be part of any real program of change. I would hence ask His Majesty King Abdullah II to outline his vision of this very change for Jordan. The impressive speed with which two of the most rigid and longstanding autoritharian regimes (Tunisia and Egypt), and individuals, collapsed has raised the expectations of an ever growing unemployed urban youth population to get rid of the high levels of oppression, socio-economic inequalities, dismal healthcare, poor education, cultural anxiety, political humiliation, loss of dignity and self-respect to which they have been subjected during decades of dictatorships. ...read more.

Commensurately, the Arab countries' share in international trade remained insignificant with the exception of oil and gas. Nowadays, the popular unrests shaking many Arab states, including Jordan, will not make a positive difference if the governments at question do not create jobs and nurture entreupreneurs.. This would require, first of all, a political overture, an independent judiciary, and building a responsive government that would ensure a vibrant society and a dignified life to its citizens. The latter must overcome the prevailing bitter sense of disability: the inability to change anything in their lives, whether politically, economically or culturally; they have to be empowered. ...read more.

Its leaders are also well aware of the geopolitical constraint it faces: the kingdom desperately needs regional peace, security and stability because its prosperity, like that of its neighbors, hinges essentialy on regional integration.In the absence of a final comprehensive resolution of the Palestian Question and the Arab-Israeli conflict, the Arab Spring has afforded Jordan with an opportunity of moving towards regional integration. Indeed, the Gulf Cooperation Council regrouping the oil rich monarchies has offered Jordan full membership. Given the above-mentioned conditions obtaining in the region, and in Jordan, it would indeed be interesting to hear the views of His Majesty on how to attend to the aspirations of the youth and move the kingdom forward. ...read more.