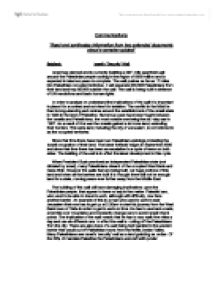 Communications 'Read and synthesise information from two extended documents about a complex subject' Subject: Israel's 'Security' Wall Israel has planned and is currently building a 397-mile apartheid wall around the Palestinian people costing in the region of �400 million and is expected to take two years to complete. The wall pushes as far as 17 miles into Palestinian occupied territories. It will separate 300,000 Palestinians from their land and trap 95,000 outside the wall. The wall is being built in defiance of UN resolutions and basic human rights. In order to analyse or understand the implications of the wall it is important to place it in a context and not view it in isolation. The conflict in the Middle East is long-standing and centres around the establishment of the Israeli state in 1948 in the land of Palestine. Numerous wars have been fought between the Israelis and Palestinians, the most notable one being the six-day war in 1967. ...read more.

An example of this is a man who used to work in east Jerusalem that now has to get up at 3.30am to start his journey from the West Bank town of Yatta in order to get to work on time. He has to use back-roads, scramble over mountains and constantly change cars to avoid Israeli check points. The implication of the wall means that he has to now walk five miles a day and use six different cars. In effect the wall is cutting off the Palestinians from the city. There are also plans of a wall being built parallel to the western barrier that would cut off Palestinian towns from the fertile Jordan Valley. Many Palestinians see Israel's 'security' wall as a land grabbing exercise. Of the 22% of mandate Palestine the Palestinians were left with (under occupation), the wall when completely built, will leave them with less than half of this (10% to be exact). The wall has engulfed many villages, virtually sealing them off from the world as the wall loops around their perimeters (an example is Hable). ...read more.

However Israel's response to this, given by an Israeli Ministry of Defence spokeswoman (Rachel Naidak-Ashkenazi) said that international anger was misplaced because it misunderstood the 'rationale' of the fence. The Americans are threatening to deduct the cost of sections that stray too far from the internationally recognised Green line dividing Israel from the West Bank from 9$billion of loan guarantees it has given to Israel. In response to this (the American threat) Israel has agreed not to join the new stretches of fence east of Ariel and Kedumim to the main fence for the time being, but to leave a gap, pending further discussions with the USA. In conclusion Israel's security wall is being built at the cost of Palestinian livelihood. Farmers are being separated from their crops, families from their relatives and those in need of medical treatment are being delayed or stopped from reaching hospitals. Israel hasn't considered the consequences of building the wall for the Palestinians, and is not bothered by them. Perhaps the most objectionable consequence for Palestinians is they are now under further control of the Israelis, taking them one step back along their journey towards independence. ...read more.