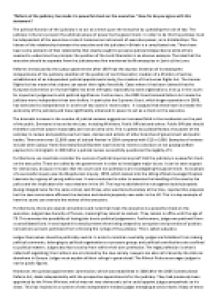 Reform of the judiciary has made it a powerful check on the executive. How far do you agree with this statement?

Judges also face scrutiny from within their own profession. The legal profession is what is called self-regulating; their actions are scrutinised by the Law society. Lawyers are also not trained by the state as elsewhere in Europe. Judges must explain all their rulings in great detail. The Kilmuir Rules encourages judges to not be public figures. Moreover, the judicial appointments commission, which was established in 2006 after the 2005 Constitutional Reform Act, deals independently with the prospective appointments for the judiciary. They had previously been appointed by the Prime Minister, which was not very democratic as he could appoint judges sympathetic to his views. This has resulted in a number of very independent-minded judges emerging at senior levels. Many of these judges feel they do have a politically important role. Several of these judges are also willing to use the media to express their views. Furthermore, the EU has an impact on the ability of the judiciary to be a powerful check on the executive. The Social Chapter of the 1992 Maastricht Treaty transferred a lot control over employment and other social rights over to the EU. In these areas the UK judiciary is required to enforce such laws and interpret their meaning. ...read more.

Another reason why reform of the judiciary has not made it a powerful check on the executive is that Cameron has the power to veto decisions made by the Judicial Appointments Commission. However, this is a theoretical problem that had not yet occurred. The government retains control of the legal system through the Justice Ministry. This does not constitute direct control, but suggests a good deal of interference. Moreover, subjudice has been breached in the past. In recent years there has been an increasing tendency for politicians to enter into open political dialogue with judges over such issues as sentencing policy and the protection of rights. This may result in indirect pressure being placed on the judiciary. In 2007 the Home Secretary John Reid openly criticised the decision not to deport the murderer of head mast Philip Lawrence. Previous Home Secretaries have criticised the decisions releasing 9 Afghan hijackers in 2003 and for releasing terrorist suspects from Belmarsh prison in 2005. To conclude, the judiciary remains central to British politics and is vital if democracy is to be upheld. It is a powerful check on the executive for the reasons outlined in this essay, such as? It is a channel where the people are able to question the government and the reforms have made it even more powerful as a check on the executive. ...read more.