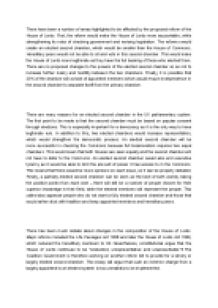 ﻿There have been a number of areas highlighted to be affected by the proposed reform of the House of Lords. First, the reform would make the House of Lords more accountable, while strengthening its roles of checking government and revising legislation. The reforms would create an elected second chamber, which would be smaller than the House of Commons. Hereditary peers would not be able to sit and vote in this second chamber. This would make the House of Lords more legitimate as they have the full backing of those who elected them. There are no proposed changes to the powers of the elected second chamber so as not to increase further rivalry and hostility between the two chambers. Finally, it is possible that 20% of the chamber will consist of appointed members which would ensure independence in the second chamber to separate itself from the primary chamber. There are many reasons for an elected second chamber in the UK parliamentary system. The first point to be made is that the second chamber must be based on popular consent through elections. This is especially important for a democracy as it is the only way to have legitimate rule. In addition to this, two elected chambers would increase representation, which would strengthen the democratic process. ...read more.

Many members of the House of Lords are specifically appointed because of their experience and personal distinction. In an elected system, however, it would be difficult to imagine how such a wealth of knowledge could be retained. Most likely, only politically active people would be running for election. This is due to the fact that elections involve much media attention which could deter those who might have been chosen by a ?publicity free? Appointments Commission. It is true that the House of Lords needs political experts in order to comprehend the workings of Parliament but too much of a political bias might limit the intellectual resources of the House. Of course, the current system is not flawless either. A striking drawback is that the vast majority of the Lords are elderly, which on the one hand underlines their experience, but on the other hand this hints to the fact that they might not be familiar with the recent developments of their professions. Another factor which determines the Lords? excellent working performance is their ability to think independently. Many life peers do not currently confess to any political party. This allows them to have a more unbiased approach to legislation than Members of Parliament who are under constant pressure of their party whip. Yet, society will put an election of the House of Lords on a level with the many other political elections. ...read more.

Democratic instinct tells us that any part of the Government, especially Parliament, should be democratically elected without any external influence. Thus, no matter how high the quality of the debates or how representative the Lords may be, the upper chamber is automatically deemed undemocratic as it is not chosen by the electorate. Some say that in a democracy, those who make the laws should be chosen and removed by the people, so the Lords should be elected. However, they should not forget that elections actually require the electorate to vote ? otherwise an elected system would not make much sense. With already numerous local, national and European elections we start to recognise a falling interest in politics among people, a common sign of ?voter fatigue?.16 In fact, voting turnouts have never been as low since the Second World War, with the 2001 general elections hitting a record low of 59.4 per cent. It can therefore be argued that turnouts for another election do not seem promising. In conclusion, it seems that an elected second chamber is not suitable for the country at the moment. However, rather than leaving the situation in its current state, a solution could be to replace Prime Ministerial patronage with an independent Appointments Commission so that experts could be retained in the House, while making it more representative of society as a whole. This would provide the chamber with sufficient legitimacy to amend legislation without challenging the House of Commons as the leading chamber. ...read more.