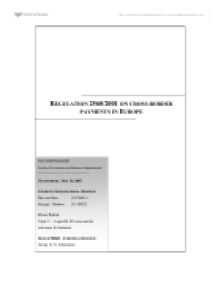 REGULATION 2560/2001 ON CROSS-BORDER PAYMENTS IN EUROPE TABLE OF CONTENTS Introduction 2 Arguments for and against 3 The case for the regulation 3 The case against the regulation 4 Implementation in the context of general EU governance 6 Technical aspects 8 Rivalry in the payment industry 12 Economic background 13 Conclusion 15 References 18 Appendix A - The regulation in full text 21 Appendix B - Teamwork 25 Appendix C - Statement on grading 25 INTRODUCTION The widely acknowledged aim of the European Union is to ensure increasing integration between its member states. The most important field on which integration takes place is the economy. In the treaties of Maastricht 1992, a milestone in economic integration was brought on its way; the euro. When it was introduced as book money in 1999 and when it replaced national coins and banknotes in 2002, experts and politicians were expecting a huge leap forward in the integration process. While the full effects still are difficult to assess, there is also agreement that other factors and obstacles to the free flow of capital must be removed in order for the Euro to unleash its full potential. One such obstacle is the high prices that banks charge on international money transfers. The prices are in sharp contrast to the extremely low ones charged domestically and are thus at odds with the idea of a European domestic market. To change this undesirable situation, the EU first tried to lobby the banks to change their pricing and when this was not successful, it enacted regulation 2560/2001 "on cross-border payments in Euros" that "lays down rules on cross-border payments in euro in order to ensure that charges for those payments are the same as those for payments in euro within a Member State." (see regulation in Appendix A) The regulation was enacted on December 19, 2001. In June 2002, Swedish authorities decided to extend to the Swedish Krona. ...read more.

On the other hand, an agreed on standards leaves the banks little incentive for competition on the customer level. Kemppainen (2003) identifies five market dynamics that can be applied to the payment industry. Tipping, excess momentum, path dependence, critical mass and underproductivity are all concepts that are to some extent applicable to the retail payment industry and foster a situation of cooperation in the market. By implementing Regulation 2560/2001 the EU tries to create a situation where a competition for the market arises. Apparently, the European Committee is of the opinion that the economies of scale that result from a common standard are more important than the decreased competition between the payment systems. Whether this results in an optimal situation is very hard to estimate; time will tell. The only thing that is certain is that customer prices of cross-border transfers have dropped significantly since Regulation 2560/2001. ECONOMIC BACKGROUND Giving a precise estimate of the impact of regulation 2560/2001 on the European economy is hard if not impossible. This is due to a number of reasons. First of all, there are still problems with the implementation and especially the enforcement of the regulation. Even though often prices for intra-European transfers have fallen dramatically, there are still cases where banks keep their old practices of double-charging and of taking high prices. However, the EU commission itself has no power to sanction such violations; this is left to national authorities (Bolkenstein, 2002). As a consequence, uncertainty of the customers and - more importantly - of the potential customers prevents a stronger use of European payment systems. Another factor making direct links to economic performance in Europe impossible is that the regulation happened in context with many other legislative and executive initiatives of the EU and national governments and with all different kinds of influences that are occurring simultaneously and that often have much stronger effects on the economy. ...read more.

Regulation on charges levied for payments made within a Member State, * the advisability of increasing the amount provided for in Article 6(1) to EUR 50 000 as from 1 January 2006, taking into account any consequences for undertakings. This report shall be accompanied, where appropriate, by proposals for amendments. Article 9 Entry into force This Regulation shall enter into force on the third day following that of its publication in the Official Journal of the European Communities. This Regulation shall also apply to cross-border payments made in the currency of another Member State when the latter notifies the Commission of its decision to extend the Regulation's application to its currency. The notification shall be published in the Official Journal by the Commission. The extension shall take effect 14 days after the said publication. This Regulation shall be binding in its entirety and directly applicable in all Member States. Done at Brussels, 19 December 2001. For the European Parliament The President N. FONTAINE For the Council The President A. NEYTS-UYTTEBROECK APPENDIX B - TEAMWORK The following division has been used in writing: introduction -- Thorben the case for the regulation -- Thorben arguments against the regulation -- Bas implementation in the context of general EU governance -- Thorben technical aspects -- Bas rivalry in the payment industry -- Bas economic background -- Thorben conclusion -- Bas APPENDIX C - STATEMENT ON GRADING All members participated equally in the work of the team and grading should be uniform. 1 Although Mr. Arnold subtly criticises Regulation 2560/2001, he ends his speech on a high note by indicating the measures taken by the banks to comply with the regulation and stating that the banks will be happy to take further steps towards integration in the future. 2 Cheques are considered are very inefficient means of payment and should be discouraged as much as possible according to the European Central Bank (The Economist, 2004). ?? ?? ?? ?? Regulation 2560/2001 on cross-border payments in Europe - 1 - ...read more.