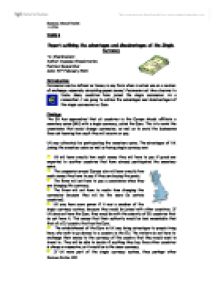 Report outlining the advantages and disadvantages of the Single Currency

TASK 4 Report outlining the advantages and disadvantages of the Single Currency To: Shareholders Author: Syazana Ahmad Nordin Position: Researcher Date: 25th February 2003 Introduction Currencies can be defined as 'money in any form when in actual use as a medium of exchange, especially circulating paper money.' Currencies act like a barrier to trade. Many countries have joined the single currencies. As a researcher, I am going to outline the advantages and disadvantages of the single currencies i.e. Euro. Findings The EU has approached that all countries in the Europe should affiliate a monetary union (MU) with a single currency, called the Euro. This is to avoid the commission that would change currencies, as well as to avoid the businesses from not knowing how much they will receive or pay. ...read more.

The establishment of the Euro in UK may bring advantages to people living here, who wish to go abroad to a country in the EU. The visitors do not have to exchange their money to the currency of the country that they would want to travel to. They will be able to decide if anything they buy from other countries is cheap or expensive, as it would be in the same currency. If UK were part of the single currency system, then perhaps other businesses from countries that are also parts of it would want to buy British exports. This is because they know that they would loose their money from paying using the pound as its value fluctuates. The single currency would improve employment circumstances across Europe. There would be more jobs such as printing the Euro, transporting it to the other countries. ...read more.

The people who live in UK probably not yet ready for the new currency because they want to stick with the pounds as they are used to it. Whilst the Euro brings advantages for the international trade because it would provide more jobs and also encouraging other companies to trade with UK. UK and other members would not lose money due to the value of their currencies changing and they would no have to pay commission when they change the currencies to enable them to trade with other countries. I would recommend that UK to become part of the single currency system only for international trade purposes. For normal business across UK, the pound should be used until the rest of the population are using the Euro. Syazana Ahmad Nordin 11 GD2 Business Studies 2003 ...read more.