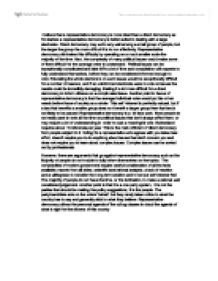 I believe that a representative democracy is more ideal than a direct democracy as for starters a representative democracy is better suited to dealing with a large electorate. Direct democracy may work very well among a small group of people, but the larger the group the more difficult it is to run effectively. Representative democracy eliminates this difficulty by operating on a much smaller scale the majority of the time. Also, the complexity of many political issues would make some of them difficult for the average voter to understand. Political issues can be exceptionally complicated and take MPs a lot of time and consultation with experts to fully understand themselves, before they can be considered informed enough to vote. Educating the whole electorate on such issues would be exceptionally difficult for a number of reasons, and if an uninformed electorate were to vote on issues the results could be incredibly damaging. Making it a lot more difficult for a direct democracy to inform citizens on a complicated issue. Another point in favour of representative democracy is that the average individual voter would put his or her needs before those of society as a whole. This self-interest is perfectly natural, but if a law that benefits a smaller group does not benefit a larger group then that law is not likely to be passed. Representative democracy is a lot less work. Most people do not really want to vote all the time on political issues that don't always affect them, or may require a lot of understanding in order to cast a meaningful vote. Switzerland requires about 10 referenda per year. This is the main criticism of direct democracy from people subject to it. Voting for a representative who agrees with you takes less effort, doesn't require you to do anything about issues that don't concern you and does not require you to learn about complex issues. Complex issues can be sorted out by professionals.

However, there are arguments that go against representative democracy such as the Majority of people do not trouble to fully inform themselves on the topics. The complexities of modern government require careful consideration of all the facts available, reports from all sides, scientific and rational analysis, a lack of reaction and a willingness to consider the long term solution and to not put self-interest first. The majority of people do not have the time, or the inclination, to make a rational well considered judgement. Another point is that it is a one party system, it is not the parties that should be making the policy suggestions, it is the people. The party/candidate acts on the voters' behalf, but they rarely takes notice to what the country has to say and generally stick to what they believe. Representative democracy allows the personal agenda of the ruling classes to cloud the agenda of what is right for the citizens of this country.